×
You are here: Home / Books / Books about the Moon Landing

On July 20, 1969 two American men walked on the moon for the first time. 2019 marks the 50 anniversary of Apollo 11, the mission that put those men into the history books. As you can imagine, there has been a recent bout of celebratory picture books about the moon landing. These books about that fateful event aim to tell a greater story than just the first few footprints onto moon dust. Who was the team behind the quest to conquer space? How many years, mathematicians, scientists, government initiatives and resources contributed to that "Giant Leap?" 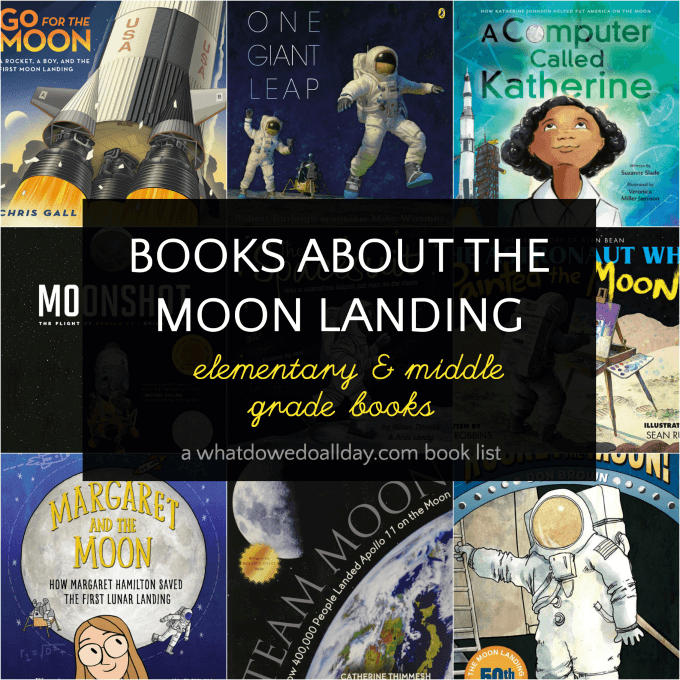 Below you can find some of my favorite children's books about the moon landing, separated into two categories: picture books read alouds for early elementary kids and middle grade nonfiction.  (Note: book covers and titles are affiliate links.)

Moon Landing Books: Ages 5 and up

The Astronaut Who Painted the Moon: The True Story of Alan Bean by Dean Robbins. Well, here I am, starting a book list about the first moon landing with a book about Apollo 12, the second moon landing. Ha, ha, ha. But seriously, folks, don't miss this wonderful book about the art and science of Alan Bean. Kids who love art, kids who love science, kids who love history, will love this story. Plus, what a great way to show that science and the arts don't have to be confined to their separate corners!

Go for the Moon: A Rocket, a Boy, and the First Moon Landing by Chris Gall. This book is great fun. In 1969, a boy narrates his experience learning about the quest to land on the moon. Through his narration, he imparts facts and figures about the history and science of the event to the reader. Gall's illustrations add an appealing dimension to this picture book.

Margaret and the Moon: How Margaret Hamilton Saved the First Lunar Landing by Dean Robbins. Margaret Hamilton grew up from being a curious girl who loved to solve problems to an MIT graduate who worked for NASA. She wrote a computer code that could solve any problem a spacecraft would encounter (which sounds like an impossible feat to me!)

Moonshot: The Flight of Apollo 11 by Brian Floca. A lovely, large book about the historic 1969 voyage to the moon. Floca's illustrations bring the wonder and drama of the flight to children, to whom a space adventure now seems commonplace.

A Computer Called Katherine: How Katherine Johnson Helped Put America on the Moon by Suzanne Slade. This biography is not specifically about Apollo 11, but gives children a great sense of the kind of hard work, scientific and mathematical investigations and experiments that went into all the lunar missions. Until now, Katherine Johnson's role was overlooked and underplayed, and she and her fellow scientists and mathematicians are important historical figures.

The Spacesuit: How a Seamstress Helped Put Man on the Moon by Alison Donald. I love this book because it introduces kids to something they may not have thought about, but without which, the lunar landing could never have happened! NASA has a competition to come up with the design for the spacesuit and Eleanor Foraker leads a team of talented seamstresses to make it happen.

One Giant Leap by Robert Burleigh. Written in free verse, this book attempts to builds up a sense of real excitement about the moon landing and the first steps of Neil Armstrong and Buzz Aldrin. It's not my favorite book on the list, but a good one to add into your mix of reading.

Books: Ages 9 and up

Team Moon: How 400,000 People Landed Apollo 11 on the Moon by Catherine Thimmesh. The approach of this book to closely examine all the people who worked to make the dream of walking on the moon a reality is brilliant. Kids will learn about scientists of all sorts, seamstresses, designers, suit testers, and more. The book uses photos, documents and other primary sources and relays the urgency, danger and challenges that beset the mission.

Rocket to the Moon! by Don Brown. I love that Brown wrote a graphic novel about the Apollo 11 mission because my son is not very interested in science, but because he loves graphic novels and comics he picked up and read this book several times. Brown is an experienced author of historical fiction for children and this is a wonderful book to read in celebration of the 50th anniversary of the moon landing.

Destination Moon: The Remarkable and Improbable Voyage of Apollo 11 by Richard Maurer. If your kids like nonfiction that reads as a novel-like narrative, this is a great choice. This is an outstanding book that sets Apollo 11 in the historical context of the Cold War, also including information on the Soviet space programs. Fantastic. 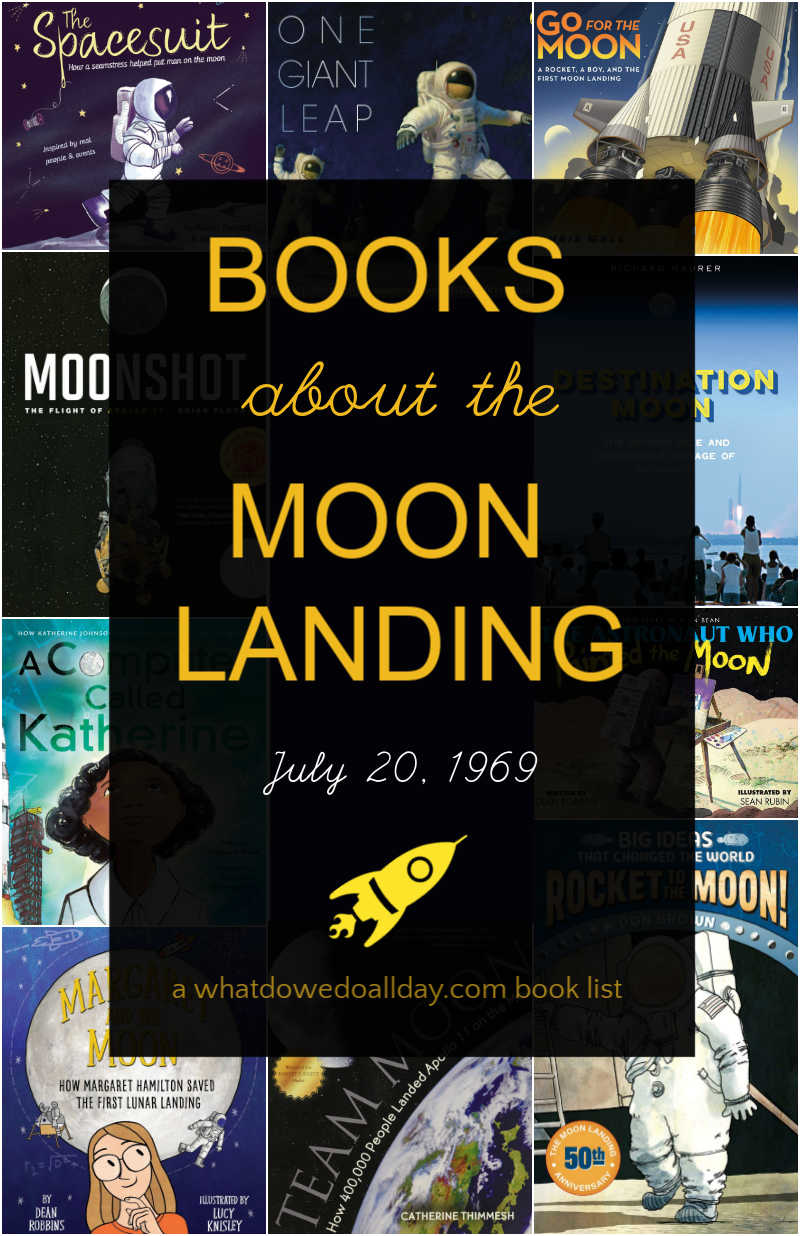 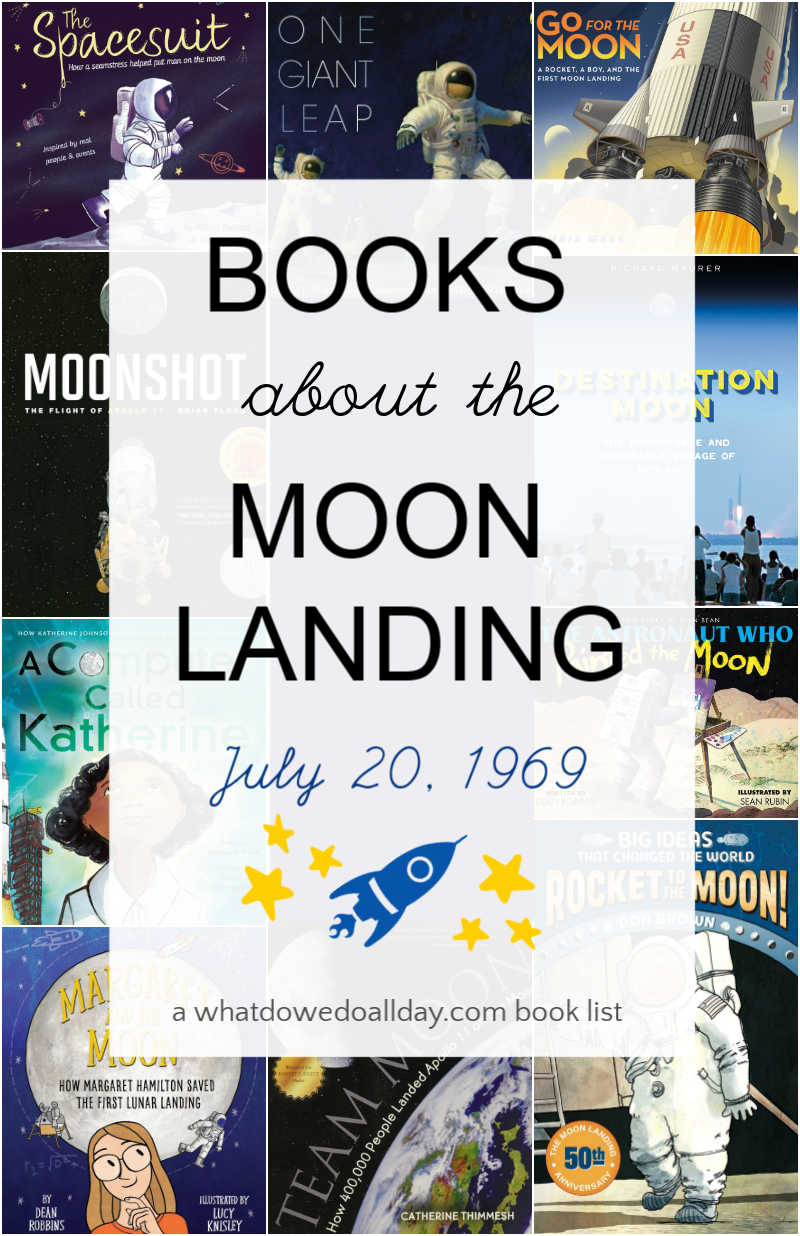 Subscribe to our newsletter and as a thank you, receive 10 waiting games kids can play anytime anywhere.
Your email will *never* be shared or sold to a 3rd party. Click here to view our privacy policy.
« Mermaid Bookmarks: DIY Cute Printable Coloring Page
Magical Mermaid Books and Crafts for Kids »
140 shares