Most recommendations lists for books like The Hunger Games focus on Young Adult (YA) literature, but I have noticed that most middle schoolers I know have read the series. Consequently I decided to focus this list of books for kids who like The Hunger Games on the upper middle grades, so about half of the books are 6th grade and above, the rest for grade 8/9 and up (which I have marked as such). 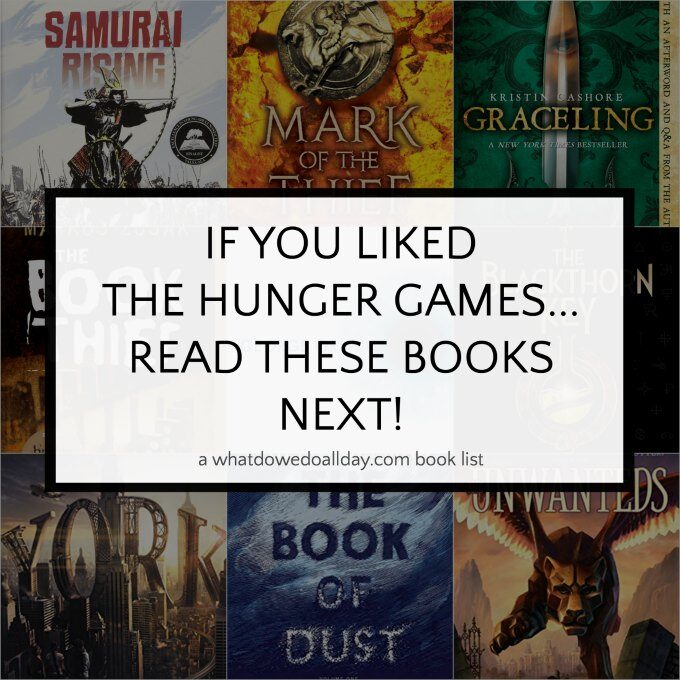 Like most of my read-alike book lists, I'm not trying to find books exactly like The Hunger Games–that would be boring! I chose books with a focus on survival stories, epic contests (physical or mental), science fiction and, of course, some dystopia. I even snuck in a nonfiction title. I hoped to create an eclectic selection so there is something for everyone. So if you liked The Hunger Games... read these next! (Book covers and titles are affiliate links.)

The Book of Dust: La Belle Sauvage (series) by Phillip Pullman. This is the prequel to Pullman's His Dark Materials series (The Golden Compass, etc.), but even if your child hasn't read that series, this one will stand on its own. Malcolm Polstead lives in Oxford and is suspicious of the new order around him. When the baby Lyra (the heroine of The Golden Compass) comes to live in the neighborhood priory, Malcolm's adventures really take off. This book is just as good as the original trilogy!

The Blackthorn Key by Kevin Sand (series).  There is some dark subject matter in this book but it is an incredibly suspenseful and action-packed read aloud for older kids. (On par with some of the darker imagery in the Harry Potter books and certainly fine for anyone who can handle The Hunger Games). Christopher, an orphaned apprentice in 17th century London must solve a complex puzzle surrounding the murders of apothecaries. Despite the seriousness of the plot, the well-drawn characters provide some humor.

The Mark of the Thief (series) by Jennifer A. Nielsen. This incredibly thrilling trilogy is packed full of action and twists behind every corn. Nic and his sister are slaves in mines just outside of Ancient Rome. When Nic discovers an ancient bulla that once belonged to Julius Caesar, the bulla infuses him with a power. He becomes both a target and a pawn in a political conspiracy. This is a excellent selection for kids who like mythology.

The Giver (series) by Lois Lowry. 12 year old Jonas lives in “The Community” in which sameness is valued and everyone’s life is pre-determined by the elders. Jonas learns the truth, however, when he is designated as the next “Receiver of Memory”, the only person who is allowed to learn about the past and the outside world. There are some heavy issues in the book, but the message is clear: freedom for people to learn and follow their own path, despite pain and chaos, are more valuable than ignorance and safety.  The entire quartet is a must read.

The Book Thief  by Markus Zusak. My son read this book for school and loved it. He kept telling me how great it was and wanted to make sure I read it, too! Set in 1939 Germany it tells the tale of Liesel Meminger, who has lost her family comes to Munich to live with a foster family. The story is narrated by Death, an intriguing conceit. A tale set during the horrors of war can't help but be dark but this novel is a page turner that will have your kids up all night, like it did mine.

The Shadow Cipher (series) by Laura Ruby. In this elaborate story, three friends band together in New York City to solve a cipher that connects their apartment building to a centuries-old mystery of how the city was conceived. This is a hefty, compelling book with stellar writing, and complex, well-rounded characters.

The Unwanteds (series) by Lisa McMann. My son loves these books, as well as the companion series, Unwanteds Quest. It has been described as "The Hunger Games meets Harry Potter." In the totalitarian land, Quill, 13 year olds are divided into three groups: Wanted, Necessary and Unwanted. Because of his creativity Alex is deemed an Unwanted and slated for execution, while his identical twin, Aaron is Wanted. But instead of ending up at the Death Farm, Alex enters a magical world where they prepare for battle against Quill.

Samurai Rising: The Epic Life of Minamoto Yoshitsune by Pamela S. Turner. This is a gripping biography, but I won't lie, there are A LOT of people who die unnatural deaths. Minamoto Yoshitsune was a 12th century samurai warrior who, after the murder of his father, grows up amongst the monks at Kurama Temple. With stunning grit and daring ingenuity Yoshitsune eventually becomes a warrior who is both admired and feared. Yes, there are a lot of gruesome details in this book, so perhaps it is not for sensitive souls. However, if you have a teen who loves Japanese or military history, this is a stirring narrative. Ages 12 and up.

The Scorpio Races (YA) by Maggie Stiefvater. I really loved this book, even though I am not usually a fan of stories about horses. Every autumn the capaill uisc emerge from the sea. Riders battle to capture and train these fierce water horses in preparation for a race on the beach. Puck is about to be the first girl to enter the races with her mare, while Sean, a past winner of the race, hopes to win the right to keep his favorite water horse, Corr. An utterly captivating story.

Graceling ( YA - series) by Kristin Cashore. In the Seven Kingdoms, everyone is born with a Grace. Katsa's grace is killing. She was raised by her uncle to believe that she must use her skills to enforce his will. She becomes friends with Prince Po, and Katsa learns that her Grace might not be what she thought after all. I recommend this book for high schoolers as it is for a more advanced reader, but the whole series is fantastic and features strong females.

1984 (Adult - YA) by George Orwell. How can I make a list of The Hunger Games read alikes without mentioning this classic dystopian novel. Better appreciated by the YA set than the middle grade crowd, this story of how a man starts to think for himself and becomes aware of the control the Party has over society will resonate with teens who will, no doubt, connect the themes of the book to contemporary events.

More books for your kids to read after The Hunger Games:

Subscribe to our newsletter and as a thank you, receive 10 waiting games kids can play anytime anywhere.
Your email will *never* be shared or sold to a 3rd party. Click here to view our privacy policy.
« Game of the Month: Invasion of the Cow Snatchers
Latino and Hispanic Middle Grade Books - by #OwnVoices Authors »
176 shares