You are here: Home / Learn / Why I Love the Theater: Mummenschanz 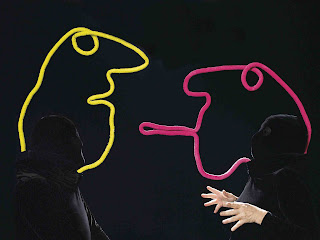 During my previous, childless existence, my life was steeped in the theater. Rarely a week went by when I was not working on, writing, reading and teaching about, or seeing the theater. Since I had kids, well… that part of my life has diminished significantly, but last night’s performance of Mummenschanz reminded me why I have always been drawn to the transformative universe of theater.

For, in what other universe will an amorphous brown blob’s struggle to reach a platform both send an audience into rapturous giggles and speak to it about common goals? Where else can two sticks bend and twist, sprout eyes, dance, face off and then become one while entrancing both my 5 year old and the 85 year old woman two rows in front of us? And where else can two strangers with toilet paper faces falling in love elicit audible “Ahhhs” from an entire audience of diverse individuals?

Only in the theatrical universe. And last night that wonderful, magical, whimiscal  and most of all, insightful, world was created for us by Mummenschanz. In the world of Mummenschanz there are no words, only our shared human emotions, struggles and conquests playfully and imaginatively rendered by performers in guises ranging from the amorphous to the human-esque. It is a tribute to this nearly 40 year old Swiss performance troupe that their performances enrapture audiences in countries with such disparate cultures as Guatemala, South Africa, Iran and the United States. What does that say about our shared existence as human beings?

In last night’s performance a giant slinky-like creature played back and forth with the audience with a giant pink balloon and when the balloon went slightly out of reach, a young boy, so enraptured with the interaction walked over, arms out and bounced the enormous balloon back to the slinky-like creature, who caught it deftly with its “mouth.”  That is the extraordinary, communal spirit of Mummenschanz. Kiddo said it best, when, at the end of the show he promptly proclaimed, “THAT was the best show I’ve ever seen!”

Don’t miss this rare opportunity to see Mummenschanz; their time in NY at NYU’s Skirball Center lasts until January 8 and after a brief stop in New Jersey, they are gone. Take the opportunity to see the performance, you will certainly be glad you did.

For tickets to the performance visit online: NYU’s Skirball Center.
For more on the history and technique of Mummenschanz, visit their website. You can also join their Facebook page.
To see short clips of their work, you can visit them on you tube. I love this one of the notebook faces that was on The Muppet Show in 1976. It wasn’t in last night’s performance.

Subscribe to our newsletter and as a thank you, receive 10 waiting games kids can play anytime anywhere.
Your email will *never* be shared or sold to a 3rd party. Click here to view our privacy policy.
« Drawing with Toddlers
Transportation Tuesday, Special Edition »