×
You are here: Home / Learn / Math Activities / The Tower of Hanoi: Math Logic Puzzle for Kids

You might have noticed we are on a serious math and logic brain teaser kick around here. After the success of the cubic puzzler and the harder-than-it-looks T puzzle, I have been on the hunt for more classic math games and puzzles. I stumbled across The Tower of Hanoi. Sounds sort of like some mysterious and legendary monument, doesn't it? The history and background will reveal a bit of why that is! (see end of post for the background) 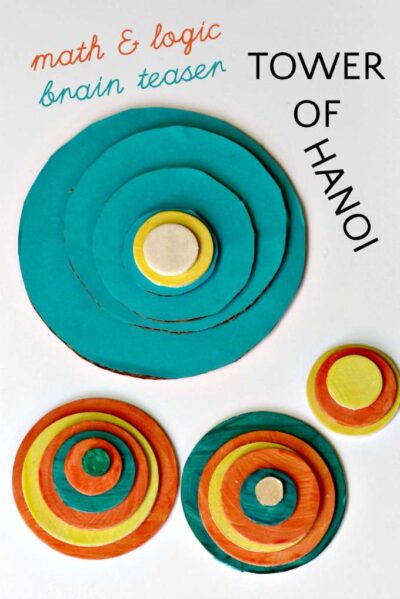 The Tower of Hanoi puzzle is traditionally composed of a stack of wooden discs that fit onto rods, but I didn't want to purchase a set, nor do I have any woodworking tools to build my own. However, it is simple enough to make your own set and play without the rods.

I was quite surprised at how much my 6 year old enjoyed playing this game. Usually it is my older son who jumps at logic puzzles. Once my youngest son had completed the 4 disc puzzle, he insisted on using as many discs as he could, and was determined to solve it!

How to Solve The Tower of Hanoi:

You need a stack of 3 or more discs in ascending size. I got an inexpensive package of craft supply wooden circles (affiliate link) and painted them. It would be fun for the kids to decorate the discs, too. 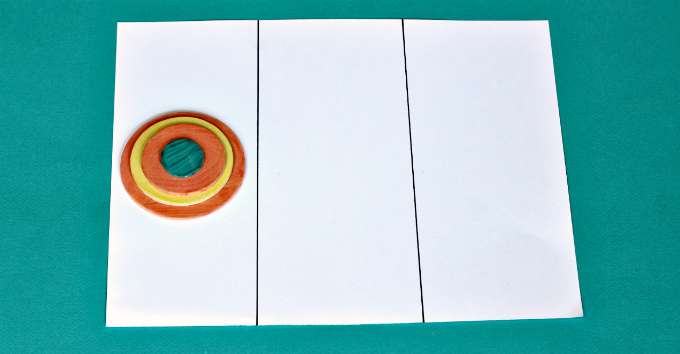 Stack the discs in order according to size with the smallest disc on top.

Designate three separate areas for stacking. We used a piece of paper divided into three sections for guidance (I'll call these sections A, B and C.)

The objective is to move the stack from point A to point C while observing the following rules:

There is a mathematical pattern that is involved in the solution. You can read about that pattern here, but I warn you, your eyes may glaze over, as mine did.

The easiest way for kids to discover the pattern is to first play with only three discs, and then with only four discs. While the Tower of Hanoi can be played with any number of discs, the pattern of moves remains the same 1) for an even number of discs; and 2) for an odd number.

Watch the video to see how it's done. Near the end, I show you the Tower of Hanoi solution and basic patterns, in case you get stuck.

Fun history of the Tower of Hanoi:

The puzzle was invented in 1883 by French mathematician Edouard Lucas. It was inspired by a legend that in an ancient Eastern temple, priests were moving a stack of 64 golden discs. Legend said that the when the last move was made, the world would end. Fortunately for us, even if they made one move per second, would take a minimum of 5oo billion years to move the stack. I hope it does not take your kids that long to move a stack of 4 discs, but good luck! 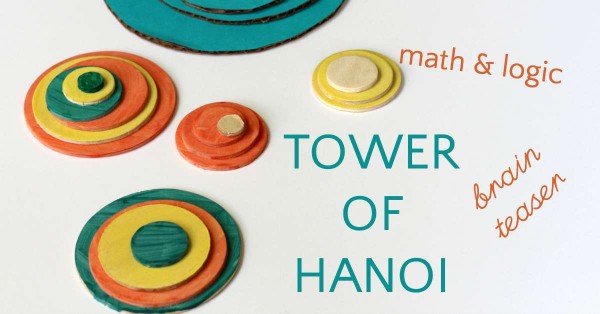 Subscribe to our newsletter and as a thank you, receive 10 waiting games kids can play anytime anywhere.
Your email will *never* be shared or sold to a 3rd party. Click here to view our privacy policy.
« 10 Actionable Tips to Reduce Your Waste, Even if You Have Kids!
Fall Read Alouds (The Whole Family Will Love) »
1039 shares