Normally I blog about books my kids AND I love, today is different. Today, I need to vent about a few books that I cannot stand. Every child has favorite books that fills his parents with dread.  I'm not talking about books you have to read a gazillion times and are simply tired of, but books you reject from the moment you saw the first page. Maybe I am being a touch melodramatic, but we've all been there. 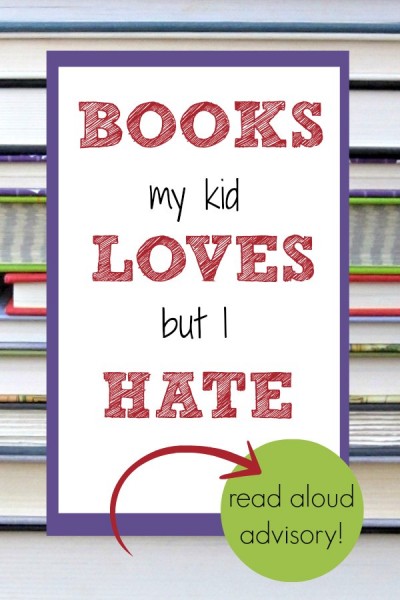 But please note, I do in fact read these books (exception: see #1 below) to my kids if they bring them to me. Over and over again. That doesn't mean I have to like them.

#5 Elmo books. I have nothing against Elmo. Really, I don't. Well, except for the fact that he refers to himself in the third person. But his books are inane. New Kid is all over the Elmo books at the library. And he has never even seen Sesame Street.

#4 Andrew Lost series. This is a chapter book series that Kiddo picked out. All 18 of them. Although there are a lot of interesting science facts in the books, the stories read like a string of facts. There is also the most annoying robot character, Thudd, who talks like a baby and is impossible to understand. Each book ends with "to be continued" so you have to read the next one (and did I mention there are 18?). AHHHHH!  I find them excruciatingly tedious.

#3 Clifford the Big Red Dog. I should begin by saying that I actually like Clifford. Every book has something a bit amusing in it. And they are a bit cheeky. But there are so darn many of them! Not only are there the original books, but there are easy reader versions, and Puppy Days versions and versions based on the TV show. It never ends! There is something nefarious about a series with a gazillion books. If there was just one, you could read it and move on. The worst of it is that the library keeps these books (along my #1 book arch nemesis), in a low bin at the front of the children's section. So the first thing Kiddo does is load up on these books. I don't have a fighting chance. I have learned to combat this by first going to the hold section, because there is nothing more interesting than a stack of books waiting especially for you with your name on them.

So, I can read a Clifford book now and again, but please don't bring a stack of them to the couch!

#2 Anything by Dr. Seuss. I hate Dr. Seuss. I know you love him. Everyone loves him. I don't understand. The ridiculous rhyming goes on forever. The pictures are boring and all the same. Gah! Kiddo is not as enamored with Dr. Seuss as I feared he would be, which is good because I would rather read Tip Tip Dig Dig

for an hour (and I think I have) than pick up a Dr. Seuss book. Fortunately, the Dr. Seuss section in the library is in the back corner. Easily avoided.

#1. The Berenstain Bears. The arch nemeses of my read-aloud existence. Not only are they moralistic and boring, but they are long! If these stories were short and quick, I might be able to stand it. But they are so loooooooong! And there are a gazillion of them. The Berenstain Bears are the only books I have actually refused to read. That's right. My child asked me to read a book and I said "NO." Can you believe it? Normally, I have a policy of always reading books Kiddo chooses, but after several marathon sessions of The Berenstain Bears, I banned them because I. Could. Not. Take. It. Anymore. Kiddo can still check them out from the library, as he frequently does. But I will not read them.  In fact, he tells me -- when he chooses the book -- "I am going to read this, you don't have to." Truer words were never spoken. I cannot believe the good reviews parents give these soporific books. I guess people like books with an painfully preachy message and mind-numbing illustrations. But what do I know, I don't like Dr. Seuss, either.

And there you have it. Was I too mean? Did I overuse the italics and bold typeface?

What books do your kids love, but you hate?

For books I LOVE, visit the ultimate source for book lists: