While listening to these science fiction picture books, your children will travel to far off galaxies, imagine what happens when aliens come to earth, or explore the intersection between reality and fiction. What qualifies as a science fiction picture book? I decided it had to be more than just fantasy, with imaginative creatures or magical feats. The sci-fi picture books on this list include robots, fantastical space exploration, alien creatures and science with a mind of its own. 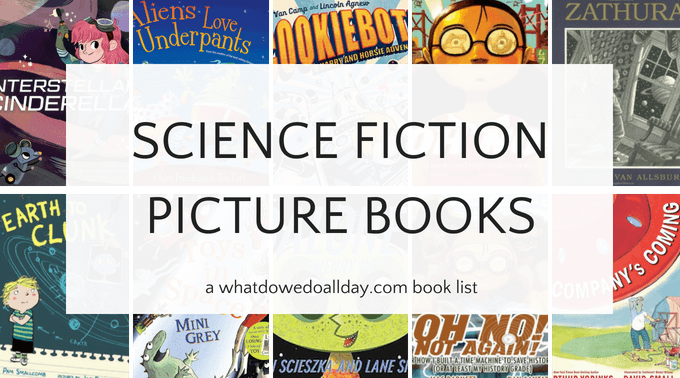 If your children have been clamoring for nonfiction books about space, then you can easily insert a little fiction into their reading diet with sci-fi!  Be sure also to take a look at our selections of fiction books about the moon. If you have older kids they will love these middle grade science fiction books for kids (Note: book covers and titles are affiliate links)

Toys in Space by Mini Grey A group of toys is abandoned overnight in the backyard (sound familiar parents?) and to pass the time, Wonderdoll starts to weave a tale about "Hoctopize," an alien who has lost his special toy, "Cuddles," and who then beams the toys up onto his spacecraft. As Wonderdoll's story takes up the main action of the book, her toy friends offer their amusing commentary in the sidebars. This type of story-within-a-story-or-is-it-really-? is just my cup of tea and observant children will be able to spot the intersection between truth and fiction.

Baloney (Henry P.) by Jon Scieszka. My son loves word play. He is always rhyming words and making up nonsense so this book held a special appeal for him. Henry P. Baloney must explain to his teacher why he is late (yet again) to school. His explanation sounds like an authentic, yet fantastic sci-fi adventure with lots of strange sounding words like "twrf" and "uyarak". It turns out these are not made up words, but words from 20 different languages. I didn't pick up on that until the end of the book so the boys and I had a good laugh. Fortunately, there is a glossary!

June 29, 1999 by David Weisner. You may think of science fiction picture books as taking place in the future, but here's a blast from the past. In 1999, Holly Evans launches vegetable seedlings into the sky via weather balloons in order to observe the effects of extra-terrestrial conditions on their development. When gigantic veggies start to fall to Earth, everyone assumes it's Holly's project. Holly knows otherwise, however and the twist at the end reveals the "scientific" truth.

Aliens Love Underpants by Claire Freedman. I don't know about your kids, but my boys love a book that involves underpants humor. It turns out that there are no underpants in space (little known fact) and so the aliens must make special trips to Earth for undies of all kinds, shape, colors and sizes. What could be better than underwear-loving aliens? Why underwear-loving aliens that rhyme, of course! Why not indulge in a few giggles? Not all picture books have to be profound (thank goodness).

Interstellar Cinderella by Deborah Underwood is a fun outer space take on the classic fairy tale with a twist. Cinderella fixes rockets and helps the prince out of a jam when his space craft has mechanical trouble.

Harry and Horsie by Katie Van Camp. Harry can't sleep when his Super-Duper Bubble Blooper lies temptingly on the shelf! With his toy, Horsie, he gets it down and starts filling his room with bubbles. These are no ordinary bubbles, however, and they envelop his toys, including - gasp! - Horsie, and start floating into outer space! There's nothing for Harry to do but chase after the bubbles, and so he races along Saturn's rings, soars through the Milky Way and swoops around satellites! My then-4 year old LOVES this book and found the sequel, CookieBot!, (in which Harry's cookie-stealing robot goes out of control) to be just as entertaining.

There's Nothing to Do on Mars by Chris Gall. After Davey and his family move to Mars, he begins to complain of boredom. His parents instruct him to simply, "Go out and play." So Davey and his robotic dog, Polaris, go out on his scooter, meet some aliens, build a fort and dig for treasure. I really liked that this book wove a lot of of nonfiction information about the conditions on Mars into a science fiction picture book.

Earth to Clunk by Pam Smallcomb. Instead of getting a pen pal from, say..., France, our hero gets one from the planet Quazar. To show his displeasure, he begins to send his new correspondent a series of unusual packages -- from dirty socks to his big sister (seems logical). In return, Clunk sends his own presents. They are a bit, er, unique, but the boy finds he misses them when they stop. I love the dry, tongue-in-cheek humor of this book, plus the hilarious illustrations. A charming and gentle science fiction story for kids.

Oh No!: Or How My Science Project Destroyed the World by Mac Barnett has become one of the all-time classic science fiction picture books for kids. If your child is a budding scientist or loves inventing things, he or she will enjoy the mayhem that ensues when a science fair project turns out a bit too good. The illustrations depicting the epic battle for control evoke Japanese B movies and superhero comics. Funny, clever and engaging this is sci-fi at its best and it's only the girl's scientific genius which can save the day. Be sure to read what happens next in Oh No! Not Again!: (Or How I Built a Time Machine to save History) (Or at Least My History Grade).

Zathura by Chris Van Allsburg. This is a sequel of sorts to Chris Van Allsburg's masterful Jumanji. At the end of Jumanji two boys run off with a board game and in Zathura they finally play it, and it turns out to take them on a surreal, galactic adventure that requires the boys to overcome their sibling rivalry. I do think Jumanji is the superior book, but my boys found Zathura to be great, suspenseful fun.

Company's Coming by Arthur Yorinks. When aliens land in suburbia, it's important to remember your manners! It's also good to have spaghetti and meatballs on hand and not to be too hasty about calling the FBI. The story has a nice message about refraining from prejudging others. Be sure to read the sequel, Company's Going. 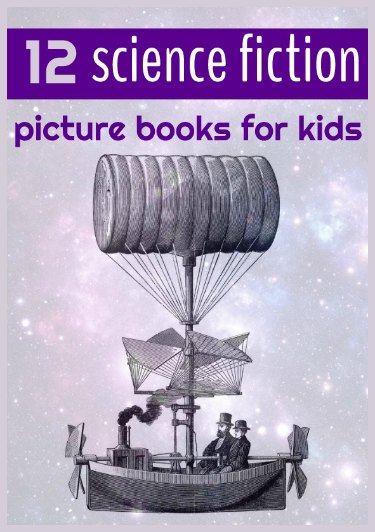 Subscribe to our newsletter and as a thank you, receive 10 waiting games kids can play anytime anywhere.
Your email will *never* be shared or sold to a 3rd party. Click here to view our privacy policy.
« Science Fiction Books for Kids that Will Blow Their Minds
How to Help a Sore Loser Develop Good Sportsmanship »
2658 shares