×
You are here: Home / Learn / Math Activities / Saving Up: Children and Allowance
1177 shares

A lot of parents struggle to decide how to give their children an allowance. How much is too much? Should they have to earn it? We developed an allowance system that works for us and my son now keeps his own accounts in a ledger! 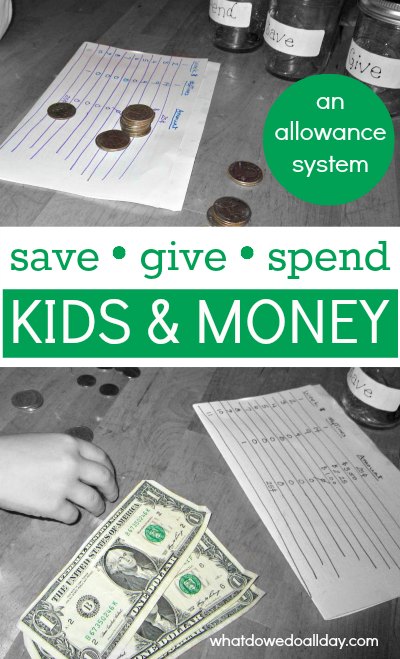 A few months ago we decided to give Kiddo a way to earn some money. He was constantly asking for stuff and being The Tyrant I am, the answer was always, "No." I know there are different schools of thought on allowances, but I am not keen on giving kids an allowance for "just being part of the family" nor am I interested in paying him for things he should be doing anyway as a member of said family, like helping clean up, etc. So instead we decided that he could earn money by helping with the family pet. 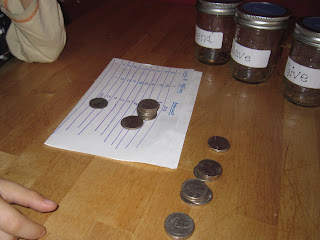 Each day Kiddo has two opportunities to help his dad feed Zeke. If he does, he earns 25 cents. So the most he can earn in a week is $3.50. He has three jars: Save, Give and Spend. He is required to put the first 2 quarters in Save, the next quarter in Give and the rest of the cash is his to divvy up how he likes. Mostly it goes in Spend, but he does sometimes put extra in the other two jars. (We also keep tzedakah boxes to teach the kids about giving to charity.)

As an added incentive to Save his money, his Dad and I match whatever he puts in that jar. Sort of like a 401(k) plan for 5 year olds. With a really good return rate.

He doesn't always take the opportunity to earn money. Sometimes he doesn't want to interrupt his current activity to help out, and we never pressure him. We want him to see the rewards when he takes responsibility for his "job" and the consequences if he doesn't. There is no punishment if he doesn't feed the cat, he simply doesn't get paid. 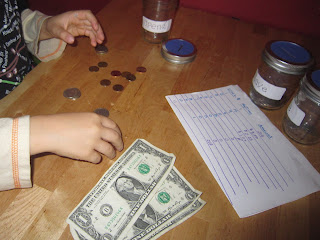 For a while he was really jazzed and never missed the opportunity to help, but that faded and he was only "coming in to work" sporadically. I realized that part of this was that I was getting a little slack about paying him at the end of every week. So instead I made a chart of the weeks so far, listed the number of times he worked and together Kiddo and I set about counting the change and adding up his totals. He liked putting the quarters in stacks of 4 to exchange for dollars and then counting how much was in each jar.

After seeing the piles of quarters he returned to his earlier enthusiasm for working. But he has already shown hot and cold periods, which how I expect things to continue. I am curious to see how things shake up once he has made his first purchase. He hasn't spent any money yet. He is saving up for a penguin game which costs $20.

How do you deal with allowances and spending money?

Now that he has an allowance, he keeps track of his accounting my keeping a ledger!

Subscribe to our newsletter and as a thank you, receive 10 waiting games kids can play anytime anywhere.
Your email will *never* be shared or sold to a 3rd party. Click here to view our privacy policy.
« Homemade Halloween Costumes Need Not Be Perfect
Toddler Busy Activity: "Playing the Slots" »
1177 shares