I am calling this a list of “chapter books to read aloud to 3rd graders”, because my older son is 9 years old and is in (you guessed it) third grade. However, the books on this list certainly can be enjoyed by 2nd, 4th and 5th graders, as well as kids older and younger. 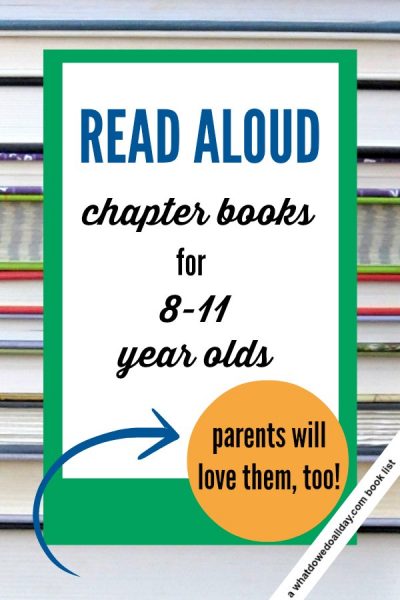 I you have more than one child you may relate to how challenging it is to find read aloud chapter books appropriate for both my 5 year old and 9 year old at the same time. I try to find time to read solo with my older son, but it’s not always possible. While my younger son does listen in when I read these books, it is clear that he does not get as much out of them as his brother. He follows the plot, but the greater themes elude him.  On the other hand, these selections do get my 9 year old looking “beyond the plot.”

These titles are all considered “middle grade,” suitable for children ages 8-12. Best of all, they are all books that (in my opinion) parents will also enjoy.

I have a few other lists that include books at this level and I’ve linked to them at the bottom of this post. (Book covers and titles are affiliate links.)

Chapter Books to read aloud to 8 to 11 year olds

Note: since publishing this book list of chapter books to read aloud to 3rd graders, I’ve now have my 2nd third graders and I’ve updated it with a few additional titles.

The Enormous Egg. Both kids loved this book from the 1950s in which a chicken’s egg hatches to reveal a baby triceratops. Nate Twitchell names his new pet Uncle Beazley. Caring for Uncle Beazley is not without its ups and down. The dino can’t help but get into trouble until one day its time to take him to the National Museum in Washington, D.C. If you have a child who you think is ready to listen to chapter book and he or she loves dinosaurs, try this charming, funny book on for size.

The Nanny Piggins Series by R. A. Spratt. Reader beware: if you do not have a healthy appreciation for hilarious and ridiculous scenarios and absurd characters, run as fast as you can away from this Australian series. On the other hand, if you enjoy seeing your kids giggle hysterically, introduce them to Nanny Piggins. Last summer we read this first Nanny Piggins book and it was one of the highlights of the summer. If you haven’t read Nanny Piggins yet, start with the first book, The Adventures of Nanny Piggins. (You can see it on my list of funny read alouds.) We have since read all three books and have laughed ourselves silly over all of them.

Frindle.  Although I’ve recommended other books by Andrew Clements, I believe this is the first time I’ve put his most famous novel on a list. Frindle is the story of Nick Allen who decides to show his vocabulary-obsessed fifth grade teacher, Mrs. Granger, that if he wants to, he can invent a new word that will end up in the dictionary. With the help of his friends, Nick succeeds in renaming a “pen” a “frindle”. Both my kids found this book hilarious.

When Mischief Came to Town by Katrina Nannestad is hands down my favorite read aloud so far this year. In early 20th century Denmark, an orphan girl meets her grandmother for the first time when she goes to live with her after the death of her mother. Inge Maria is a free spirit and even though trouble seems to follow her wherever she goes (hilarious trouble, to be sure) the townspeople and her grandmother can’t help but fall utterly in love with her. I thought Nannestad masterfully handled Inge Maria’s grief over her mother’s death, her joyous attitude towards new experiences, and her headstrong imagination. If you are a fan of Anne of Green Gables, you will love this book.

Mean Margaret by Tor Seidler. We love Seidler’s books and this one qualifies as the funniest so far that we’ve read. A belligerent toddler gets lost in the forest and is adopted by a woodchuck couple. The are forced out of their den and live together in a cave with a bat and a few other furry fellows. Along the way, Margaret learns a thing or two about how to treat others.

is part of Eleanor Estes’ The Moffats series. The chapters are a series of loosely connected stories so it is easy to take a break between chapters. I like reading classic books like this aloud because I think it’s easier for the boys to be exposed to unfamiliar vocabulary and more complex sentence structures by listening. Kiddo is not as prone to pick up a book with tiny print and unfamiliar situations as he is to pick up a more modern novel. Yet, after having listened to the book, he enjoys re-reading it independently. That’s great for his brain. New Kid got a lot out of it, too. His favorite part was when Rufus was trying to discover how his neighbor’s piano played itself!  Also available as an ebook.

I still remember my 5th grade teacher reading The Westing Game to the class. I was completely riveted and it continues to be one of my favorite chapter books of all time. Mr. Westing, an eccentric millionaire writes his will as a game. The named beneficiaries must discover who murdered him in order to inherit his fortune. “Players” are separated into teams with clues. This unusual mystery kept my son on the edge of his seat, with its host of curious characters and surprising  plot twists. I love how this book requires listeners to pay attention to details, thus exercising kids’ reading comprehension skills. Also available as an ebook.

independently, but he also wanted be to read it aloud. This used to happen all the time when he was younger but now it is a rare occurrence and I snatch it up when I can. What I wasn’t expecting was for his 5 year old brother to be equally taken by the book! In fact it was New Kid who was begging me to “keep reading!” Claudia and her brother Jamie run away to NYC where they hide out in the Metropolitan Museum of Art and try to solve the mystery of a statue’s identity.  Also available as a ebook.

because he enjoyed the companion novel, Where the Mountain Meets the Moon, but it turned out to appeal only to my older son. As with the earlier book, the main narrative is interspersed with fable-like stories told by the characters (my 5 year old always perked up at these stories, I think he mostly had a harder time following the main story thread for some reason). Runaway Rendi finds himself in the Village of Clear Sky where the moon is missing. Only Rendi can hear it moaning at night. When a mysterious woman comes to stay in the village, her storytelling may provide some answers. A fascinating and gorgeous book.  Also available as a ebook.

I think The Watsons Go to Birmingham–1963

was successful as a read aloud in our house because of the dynamic and rather hilarious relationship between the two brothers. Well-behaved 9 year old Kenny and his not-so-well behaved 13 year old brother, Byron, navigate family (the “Weird Watsons” as Kenny refers to them) and school life in Michigan until their parents decide that Byron needs to spend the summer with Grandma down in Alabama. Together they set off on a road trip. Shortly after arriving in Birmingham that community is devastated by the infamous church bombing. If you are avoiding this book because you worry about your kids being distressed over the heinousness of that historical event I would urge you to reconsider. Curtis handles the theme of racial tension so well (and it’s not the main focus of the book, family life is the main theme), that I have no reservations recommending this book for kids ages 8 and up. This is the third time I have included this book on a list, which means you must put it in your to-read stack! Also available as an ebook. (Note: please read Ashley’s note in the comments section. I still love and recommend this book, but you may want to save it for 5th grade and up.)

A Long Way From Chicago

is a modern classic. Siblings Joey and Mary Alice visit their Grandma Dowdel in downstate Illinois. Set during the Depression, with a quirky cast of characters (especially Grandma!), my kids liked this one a lot. They usually respond well to anything that is funny and even if some of the text and vocabulary goes over New Kid’s head, when he sees his older brother laugh, he laughs right along with him. He never wants to be left out!

Other book lists you may find useful:

What books are you reading aloud to your upper elementary school aged children?

Subscribe to our newsletter and as a thank you, receive 10 waiting games kids can play anytime anywhere.
Your email will *never* be shared or sold to a 3rd party. Click here to view our privacy policy.
25591shares
« Poetry Challenge for Kids
More Plant Science: Regrowing Vegetables from Scraps »