Although I am titling this list "Princess Chapter Books," not every protagonist is actually royalty. Some of the stories are adapted from traditional princess fairy tales, some protagonists aspire (or not) to royalty and others simply act like a princess should act. These princess chapter books are all middle grade level, for kids ages 8 and up. 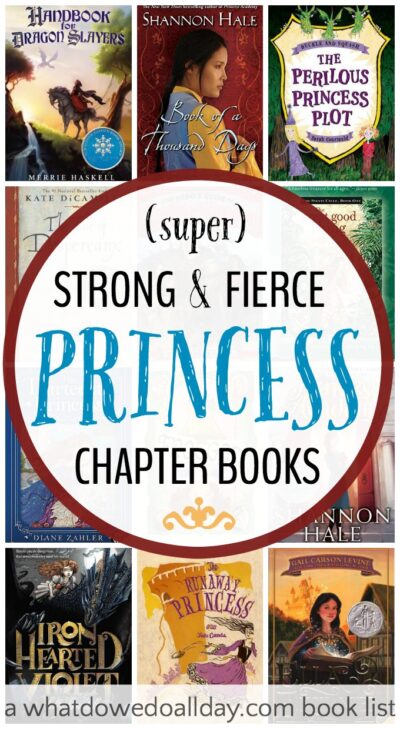 I would also like to heave a great big sigh for the lack of diversity on this list. If you know of a princess fairy tale book with a non-white protagonist, by all means, let me know so I can read it and add it to the list if it's good!  (Note: Book covers and titles are affiliate links.)

Buckle and Squash: The Perilous Princess Plot. If you follow me on Instagram, you know that I  just finished reading this one aloud to my 6 year old and we could not stop laughing! I quite enjoyed creating silly voices for all of Sarah Courtauld's ridiculous and charming characters. Hard-working, practical Eliza and her dreamy, prince poster-collecting sister Gertrude are total opposites. When Gertrude goes off one day to find a prince and instead gets captured, her sister heads out to rescue her. We are eagerly awaiting the sequel!!

Frogged. I found this book after my kids and I couldn't stop laughing at Vivian Vande Velde's book, 8 Class Pets + 1 Squirrel ÷ 1 Dog = Chaos (see it on my Funny Read Alouds list), and I wanted to read more of her writing. Frogged, as you may have guessed, is a retelling of "The Frog Prince". Princess Imogene's mother is making her read a horrid book titled, The Art of Being a Princess. When she wanders down to a pond, a frog convinces her to kiss him. The frog, however, not only does not turn into a prince (he turns into smart-aleck peasant), but the spell reverses and Imogene turns into a frog! The only way to turn back into a princess is to dupe someone into kissing her, thus casting the frog spell on another unsuspecting person. But Imogen worries about the ethics of that! As a theater nerd I loved the way Imogene the frog gets taken on a hilarious adventure with a theater troupe, and the memorable and not-a-little bit crazy characters will keep you reading to the end. This would make a great read aloud.

The Great Good Thing (series) is a favorite of mine. It's been a while since I've read it, and writing this makes me want to pick it up again. In Roderick Townley's metafictional novel, Princess Sylvie is a character in a book. She spends her days reliving the story of her book, racing from page to page to make sure she is in the right place at the right time. One day she breaks the most important rule of being a character: she looks the reader in the eye and her life and the reader's life become intertwined. This book is probably best for experienced readers or as a read aloud. It is fantastic, but also readers must be able to understand metaphors and the complicated interplay between text and real life.

Princess Academy. No doubt you have heard of this popular book, which is now a trilogy. In the quarry village of Mount Eskel, a tight-knit community lives a hard life but when a prophecy foretells that one of the girls will be the next princess, all the "eligible maidens" (I had to get that phrase in somewhere) are sent to an isolated school.  I think the title and the cover belie how interesting and suspenseful this novel really is, and in the horrible gendered world of book covers, boys (SADLY!!) may not want to be seen reading it. If that is the case, turn it into a read aloud because, trust me, your daughters AND sons will love it.

Ella Enchanted is the most well known of Gail Carson Levine's novels. She has loads of "princess" chapter books, so if you like this one, plug her name into the library catalog and take home a stack of her books. The novel is infinitely better than the movie (as usual). You may be familiar with the premise: Ella is given the "gift" of obedience, which gets her into all sorts of trouble, not least because she is strong willed. Determined to break the curse she sets out and has a much more exciting adventure than Cinderella ever had.

The Hero's Guide to Saving Your Kingdom. (series) Christopher Healy's series is best for kids who like a lot of humor in their reading. Four bumbling princes are thrown out by their respective fairy tale princesses. The princesses have their own personality quirks, but all together they battle the less savory creatures in the kingdom and have their own versions of happy, mediocre and not-so happy endings. Very funny and hilariously tongue in cheek.

Book of a Thousand Days is one of the books here in which the main protagonist is not the princess. Shannon Hale adapts Grimms' fairy tale, "Maid Maleen." In the steppes region a mucker, Dashti, volunteers to be shut up in a tower with Lady Saren, when that Lady refuses to wed the man her father has chosen. In the tower, Dashti and Saren survive, but Saren's mental health deteriorates and Dashti plays her Lady's role. They do finally escape the tower and Dashti's efforts and wits save the girls.

Jessica Day George is another author, whose name you should plug into the library catalog. In addition to this series, George has a series of books based on more traditional fairy tale princesses. Tuesdays at the Castle begins a 3 book series about a living castle. Every Tuesday the castle adds a new feature; it could be a room, or a turret. Celia spends her time exploring and mapping the castle. Celia's brother is off at wizard school and when their parents travel for his graduation, the castle comes under attack. The castle aids Celia and two of her siblings as they try to keep the marauders at bay. The idea of a living castle is wonderful. The story continues with Wednesdays in the Tower and Thursdays with the Crown.

The Runaway Princess (series) by Kate Coombs. Princess Margaret does not want to be married off. Her parents have set up a contest in which they will bestow her hand to the hero who defeats a dragon, witch and band of bandits. "Meg" will have nothing to do with this so she escapes her tower and sets off to warn the impending victims, who are actually harmless. This is a fun, humorous and quick read. Be sure to pick up the sequel, The Runaway Dragon.

Handbook for Dragon Slayers by Merrie Haskell. Aspiring author Princess Tilda is an independent-minded princess who has never even considered slaying dragons because of her disfigured foot. However, her cousin, Ivo, wishes to steal her kingdom and she ends up fleeing her kingdom.  Her ensuing adventure involves magic, capture, a menacing Blue-beard character, and (of course) dragon slaying.

Iron Hearted Violet by Kelly Barnhill. Princess Violet is not exactly the most traditional of princesses in the kingdom but she finds her way, anyway. When she and her best friend Demetrius discover a mysterious book and accidentally release a malignant spirit, Violet must reverse the magic. The court story-teller narrates the book, giving it an interesting narrative viewpoint, which comments on the nature of storytelling, and how we decide how stories are told and authenticated.

The Thirteenth Princess is one of many princess fairy tale retellings that Diane Zahler has written. I've read all of them, including this version of "The Twelve Dancing Princesses." It is the thirteenth daughter, Zita, who discovers the mystery of the ruined slippers and breaks the enchantment, rather than a visiting prince. Zahler also has versions of "The Princess and the Pea," "Sleeping Beauty," "The Six Swans."

The Wide-Awake Princess. At the risk of sounding repetitive, you can find A LOT of fairy tale novels written by E.D. Baker. This is one of my favorites because Baker weaves a number of other fairy tales into this twist on Sleeping Beauty. Princess Annie is immune to magic, so when her older sister is fated to fall asleep at the prick of a needle, it is up to her to save the day.

The Tale of Despereaux: Being the Story of a Mouse, a Princess, Some Soup and a Spool of Thread. My son said he had also read Because of Winn-Dixie, The Miraculous Journey of Edward Tulane and The Magician's Elephant during quiet class reading time. "They were all good, mom, but The Tale of Desperaux was my favorite." Masterful and suspense-filled plot lines about a mouse in love with a princess, a rat who loves soup and light, and a not-so-bright peasant girl all come together in a marvelous tale which will get your kids thinking about love and forgiveness.

Tyme #1: Grounded: The Adventures of Rapunzel. Rapunzel has been brainwashed into thinking that the witch is her kind, benevolent mother. When Jack appears at her window one day, desperate to complete a task that will save his sister, Rapunzel becomes confused. She no longer knows who to believe. She ends up leaving her tower of safety with Jack in order to help him and discovers not just her identity, but how strong and talented she truly is. It took be a little while to get into this novel, but after I did, I found it fast paced and a clever enough story to want to pick up the next "Tyme" novel when it arrive on the shelves.

Got a favorite princess chapter book to recommend?

Subscribe to our newsletter and never miss any of our Monday book lists for kids.