This book list of picture books to teach empathy was inspired by one of you! A reader emailed me and asked for a list of books which would help her child to think a little bit less about worldly goods, and a little more about the importance of appreciating non-tangible values like generosity, humility, compassion and kindness. In other words, these are books which help teach children to reject a sense of privileged entitlement. 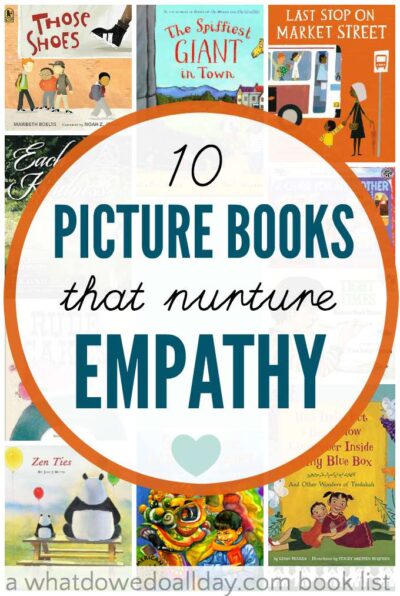 I’ve included titles that cover a range of topics, such as poverty, acts of kindness, looking for the beauty in the world around us, and charity. They are books which I hope will help you start a conversation with your children about how much they have or don’t have and what that means in the larger world, as well as what actions they can take. Think of it as a companion list to my list of books to inspire kids to change the world. (There is some cross-over of books.)

I’d love to hear from you if you have further suggestions. As always, I encourage you to leave your favorite books to teach empathy in the comments. (Note: book covers and titles are affiliate links.)

Last Stop on Market Street.  A boy and his grandma catch the bus. We don’t yet know where they are headed, but along the way the boy asks questions about why they don’t have certain luxuries. He wants to know why they don’t have a car or an ipod. The grandma has a ready answer about the advantages of what they do have and encourages him to think of positive aspects of lacking material goods. When they reach their destination… well… it will be even more inspiring. A must read.

Tight Times. A boy wants a dog, but his parents tell him “times are tight.” The young narrator explains that tight times means they have soup for dinner instead of roast beef, that they eat bulk cereal instead of the kind in small boxes, and go to the sprinklers in the park instead of the lake. One day his father loses his job and the boy heads out to the stoop while his parents talk. Outside he finds a cat. It’s not a dog, but his parents let him keep it. I like that there is no tidy solution to the story. Their troubles are not solved, the father does not miraculously get a new job. Instead, the life in the loving family goes on and we are left with a realistic picture that not everything a swift resolution.

The Spiffiest Giant in Town. George is a very scruffy giant! He decides to get a haircut and a new set of clothes and… voilà! He becomes the spiffiest giant in town. However, as he travels through the area singing a little ditty about his spiffy-ness he encounters a few creatures who need his help. He makes a present of his tie to a giraffe with a cold neck, offers his sock to a fox who needs a sleeping bag and before you know it, he’s gifted away all his new clothes. His kindness does not go unnoticed and soon he receives a gift more precious than the clothes he gave away.

Sam and the Lucky Money. Sam is excited to be able to spend his lucky New Year money. He has four dollars and his mom has told him he can buy anything he wants. On their trip through the neighborhood Sam notices a homeless man with bare feet. As he contemplates how to spend his money he gets frustrated that the four dollars is never enough to buy what he wants. His mother reminds him to appreciate what he has. During a second encounter with the homeless man, Sam understands how he can best spend his money.

A Chair for My Mother is a gorgeous book about familial love. The narrator, a young girl, describes how her family lost everything in a fire. They found a new home and their neighbors donated furniture but what they lacked was a comfortable chair for her mother to rest in after her days of work as a waitress. The family saves their change in a jar and when the coins finally reach the top, they set off to buy the perfect chair. The story is quietly appealing and shares a valuable lesson not just about perseverance and love, but about recognizing that for many families, having a good chair is a luxury.

Those Shoes. This book deals well with the topic of poverty and the importance of putting others’ needs ahead of our own wants.  Jeremy wants the latest pair of trendy shoes. All his friends have them but his grandmother can’t afford to buy him a pair. I like that she never shamed him for wanting what he couldn’t have. Jeremy finds a pair at a thrift store and buys them even though they are too small. When he makes friend with a kid at school who needs them more than he does, he gives them to him. I love how this book is honest about the struggles Jeremy has about giving the shoes away. He really wants to keep them for himself but in the end does the right thing on his own. Jeremy feels embarrassed about the shoes he does have to wear and that doesn’t disappear, making the act of kindness even more powerful.

Each Kindness. New girl, Maya, finds herself alone at school. Her obvious poverty sets her apart and the other children reject her overtures of friendship. Another girl, Chloe, narrates the action and the way the other children reject Maya, including her own admission, “She’s not my friend.” One day, their teacher drops a stone into a bowl of water to demonstrate how powerful the ripples from a single act of kindness can be. “Even small things count,” she says. Chloe decides that the next day she will be kind to Maya, but Maya never returns to school and Chloe doesn’t get her chance. This book could so easily sink into the depressing and didactic, but Woodson’s beautiful text elevates the story into a moving reminder to show kindness every chance we get.

Zen Ties. I am eagerly awaiting Muth’s upcoming Zen Socks. I am a big fan of all of his books! This book is less about worldly goods and more about getting past our mistaken impressions of others. The ever-tranquil panda, Stillwater introduces his three friends, Michael, Karl and Addy to the elderly Miss Whitaker. The children have thus far thought of Miss Whitaker as a crabby old lady but as she helps Michael prepare for the spelling bee, the group comes to a better understanding of each other.

How Dalia Put a Big Yellow Comforter Inside a Tiny Blue Box: And Other Wonders of Tzedakah. At the community center, Dalia learns about tzedakah and she makes her own tzedakah box. Back at home she explains to her younger brother, as she drops money into the box, that the box holds her wishes, kisses, hugs as well as a big yellow comforter, a butterfly bush and a banana cream pie. Her brother doesn’t quite understand so Dalia brings him to the community center where the children share their money and take the promised items to the elderly Miss Ross. Although the tzedakah box is a Jewish tradition, people of all faiths can (and should!) practice tzedakah.

Rude Cakes is a quirky book about a cake with no manners. The cake in question never says please, never shares, never waits its turn — you get the idea. One day a giant cyclops comes along and turns the rude cake into a cute hat. (Yes, I know.) This is the important catalyst that turns Rude Cake around, and it learns that perhaps it should think about others before itself.  (Note: Chronicle Books sent me a no-strings-attached review copy.)

Get our new book list every Monday delivered straight to you. 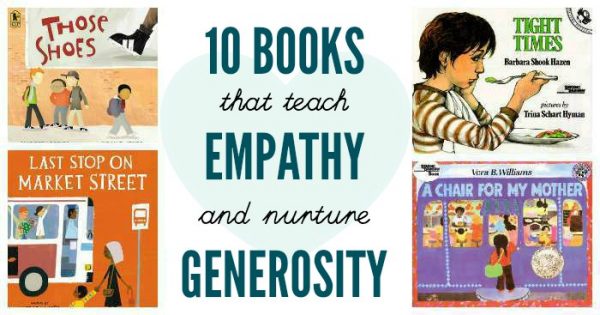 Subscribe to our newsletter and as a thank you, receive 10 waiting games kids can play anytime anywhere.
Your email will *never* be shared or sold to a 3rd party. Click here to view our privacy policy.
29861 shares
« Game of the Month: Bananagrams
10 Actionable Tips to Reduce Your Waste, Even if You Have Kids! »