Books are a great teaching tool, especially when it comes to talking to kids about tough subjects. Many parents might struggle with talking to their kids about institutionalized racism and prejudice and I hope these picture books about racism will help, because an open and honest dialogue is the only way our kids can work to combat the problem so that they and their friends can live in a better society. 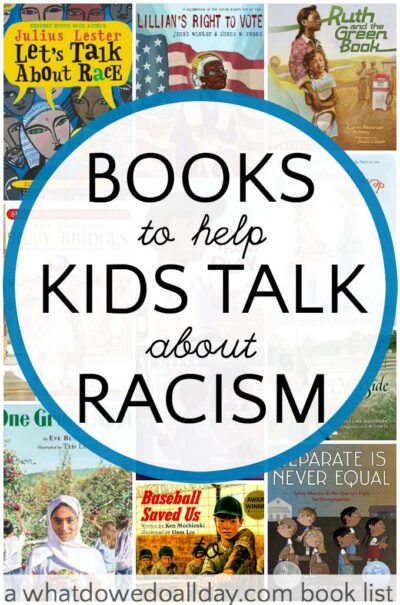 My intention with this list is to suggest books that will help you address issues surround race directly, not a general, "everyone is equal" statement, nor with a metaphorical allusion to racism. I agree that those books are extremely valuable and great for our very youngest kids. But school aged kids are ready to talk about tough subjects and tackle them head on. You'll do your kids a great service by reading them these books, as well as the books on our list of picture books to teach inclusion and anti-bias.

One note: many of these books discuss racism in an historical context, but it is crucial to connect it to the present day. It's important not to let our children think all the problems have been solved just because Jim Crow laws have been repealed, so keep the discussion going, even after the book is closed. Do you have other books to add to this list? Let's make it a great resource together and add your suggestions to the comments below.

More: See the index of all our book lists.

Let's Talk About Race. The title says it all. This book focuses on helping kids tell their own story and including their race as an integral, but only one part of their personal history. Lester begins by describing his own story and including, "Oh, and ... I'm black." His narrative then asks kids to think about how people are the same, as well as how they are different. This is a great, and useful book for getting kids to talk directly about how being of a certain race influences their personal story.

Lillian's Right to Vote: A Celebration of the Voting Rights Act of 1965. Jonah Winter and Shane W. Evans are a stellar author/illustrator team and the topic is extremely timely both as we celebrate the 50th anniversary of the Voting Rights Act and as we head into the first election season in which that Act has been compromised. The elderly Lillian climbs a hill to vote for the first time. As she climbs she recalls the history of her family and African-Americans in her country and all it took to get to this point.

Separate Is Never Equal: Sylvia Mendez and Her Familys Fight for Desegregation tells the story of school desegregation 10 years before Brown v. the Board of Education. In 1944, Sylvia's family moved to a new community. When she tried to attend school, she was told that she would have to go to "the Mexican school". Sylvia and her family fight back and eventually win a very important court battle, setting the stage for future desegregation cases. This is a great book to teach our kids that segregation extended beyond the Jim Crow laws of the South.

Across the Alley. Willie and Abe live across the alley. During the day, they never interact, but every evening the open their windows and toss a ball across the distance. The two boys worry that their parents and grandparents won't accept their friendship because Abe is Jewish and Willie is African-American. Abe's grandfather hopes Abe will one day be a great violinist  but it is Willie who enjoys the violin. One evening when Abe's grandfather hears Willie's playing everything changes -- for the better.

Let Them Play. In South Carolina an all-black Little League team became the 1955 champions by default when the white teams in the league refused to play against them. Like the story of Ruby Bridges, this book is an important reminder that kids were also victims of segregation and racism.

Baseball Saved Us. During World War II, the United States government imprisoned people of Japanese descent in internment camps. Shorty and his father build a baseball diamond in the dusty field of the camp. Shorty uses the game to build his self-confidence and channel his anger at the guards. Despite the baseball theme, this is a serious book. I also think it would be worthwhile discussing this book critically with kids: Did baseball actually save the boys? Was using their anger a productive way to approach their situation? Should assimilation actually be the real goal?

One Green Apple. During a class trip to an apple orchard, Farah, a Muslim girl who has not yet learned English is nervous about her new classmates. In her first person narrative she reveals that she knows there are tensions between her former home and her new country and she is uncertain if her classmates will welcome her. Eventually, however, one other student befriends her and the connection is made. While I think this book is a good start, it feels incomplete to me and I disliked the way Farah's "otherness" was heavily emphasized. However, I still think it is a useful resource for talking about the experience of being an immigrant.

Ruth and the Green Book. Here's something I didn't know, but which breaks my heart. From 1936-1964, "The Green Book" was a travel guide for African-Americans that included a listing of service stations that would serve them. That's something to talk about with the kids on your next road trip! Ruth and her family are en route from Chicago to Alabama to visit grandma. Ruth learns about Jim Crow laws for the first time and makes it her job to help navigate with the help of The Green Book. This is a great book about a less frequently told story. (A good chapter book to use in conjunction is the superb, The Watsons Go to Birmingham--1963)

The Sandwich Swap. School lunch time is the setting for this story about learning to appreciate differences. Lily eats PB&J and Salma eats hummus. Lily decides Salma's lunch is gross and their friendship comes to a screeching halt. The entire student takes sides in a great food debate until the girls decide to try each other's lunches and the problem is solved. I'm not a big fan of didactic books and this book is not written as gracefully as many of the others on this list, but my kids responded very positively to the story and I did really love Tusa's illustrations.

There are many other wonderful books to teach kids about the legacy of racism and to help them combat it. What would you add?

More useful book lists to help you talk to kids about racism: 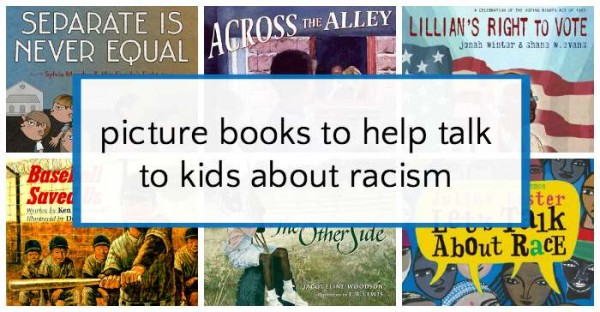 Subscribe to our newsletter and as a thank you, receive 10 waiting games kids can play anytime anywhere.
Your email will *never* be shared or sold to a 3rd party. Click here to view our privacy policy.
« Word Puzzle Lunch Box Notes: "Wuzzles"
Game of the Month: Bananagrams »
18504 shares