×
You are here: Home / Books / 51 Must Read Chapter Books for Kids (Not Your Typical Book List)

As with my previous list, 51 must-read picture books, I took great pains to ensure this was not a duplicate of all the other "best chapter books of all time" book list. You do not need another list to tell you Charlotte's Web is one of the best books ever written and that your kids must read it before they grow up.

My criteria for this must read chapter books for kids book list was two-fold:

Now, before you send me comments about how could I possibly have forgotten your favorite book (I get those comments all the time, people!) remember, there is no way to make a comprehensive book list, and that was not my aim. I do, however, feel that if you go down this list of must-read chapter books, your kids will have a GREAT time reading! (Note: book titles are affiliate links.)

Be sure to also visit:

51 (out of the box) Must read picture books

The index of all my book lists!

Must Read Chapter Books ages 5 and up

Not every child is ready to read these books at age 5—and that is normal. And these are all must read chapter books that kids older than 5 will like! 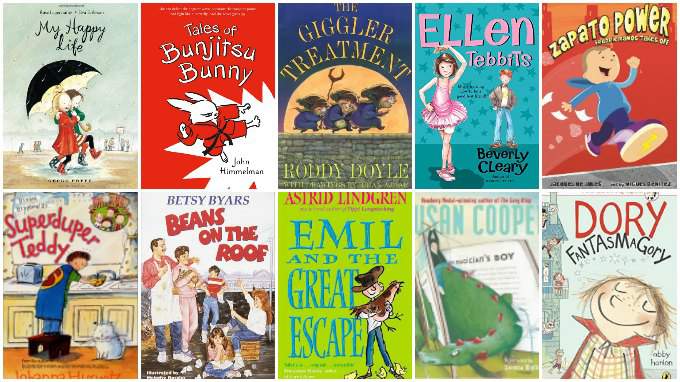 My Happy Life  (series) by Rose Lagercrantz, illustrated by Eva Eriksson. A sweet and realistic Swedish import about a girl who finds joy even amongst life's setbacks.

Bunjitsu Bunny  (series) by John Himmelman. Delightfully humorous short stories about a bunny with serious martial arts skills. Mixed in is a dose of philosophy.

Ellen Tebbits by Beverly Cleary. Ellen has a new friend, Austine, but can she keep from messing up her new relationship?

The Magician’s Boy by Susan Cooper.  A magician's assistant gets a crash course on magic when he gets thrown into the Land of Stories on a journey to find St. George.

Dory Fantasmagory  (series) by Abby Hanlon. An absolutely hilarious series about a girl with an overactive imagination.

The Giggler Treatment by Roddy Doyle. The Gigglers set in motion a super stinky prank and the kids and their dog must thwart it.

Beans on the Roof by Betsy Byers. Anna is up on the roof writing a poem for a contest, and soon her whole family is composing poetry together.

Must Read Chapter Books ages 7 and up 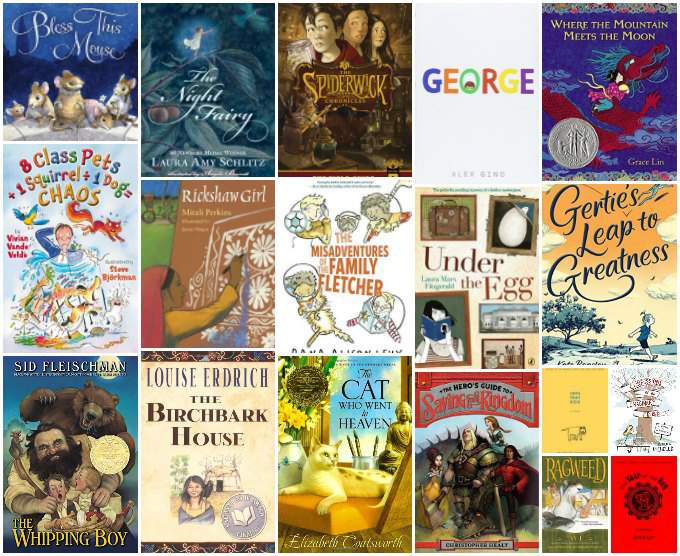 These are some of my top chapter books every child should be reading - on their own or even as a read aloud! More: see all my chapter book lists

Gertie's Leap of Greatness by Kate Beasley, illustrated Jillian Tamaki. Move over Ramona and Clementine, there is a new spunky girl in town.

The Night Fairy by Laura Amy Schlitz, illustrated by Angela Barrett. When a fairy loses her wings she must survive the night in a world full of danger and discovery.

Year of the Dog (series) by Grace Lin. Pacy navigates friends, school, family and Chinese New Year as she discovers what it means to be herself.

8 Class Pets + 1 Squirrel ÷ 1 Dog = Chaos  (series) by Vivian Vande. A laugh-out-loud tale of the chaos created when a squirrel runs through an elementary school.

Bless This Mouse by Lois Lowry, illustrated by Eric Rohmann. In Saint Bartholemew's church, a group of mice comes up with a clever way to thwart an extermination plan.

Ragweed by Avi. A charismatic mouse decides to set out on to see the world.

The Adventures of Nanny Piggins (series) by R. A. Spratt. An outrageously ridiculous nanny (she's a pig!) has some unorthodox ideas about how to raise children.

Confessions of an Imaginary Friend: A Memoir by Jacques Papier by Michelle Cuevas. In this unusual, hilarious and intriguing book, the narrator learns he is actually an imaginary friend and must find his purpose.

The Spiderwick Chronicles by Tony DiTerlizzi and Holly Black. Three children discover a magical field guide that changes their lives.

Because of Mr. Terrupt (series) by Rob Buyea. Told with alternating narratives, this story follows the experience of a group of fifth graders as they learn how to be more accepting of themselves and of each other.

Save Me a Seat by Sarah Weeks and Gita Varadarajan. This funny and touching story of an Indian immigrant adjusting to middle school and a boy who recently lost his best friend due to a move is told in alternating voices.

The Birchbark House by Louise Erdrich. The first book in a series about a Native American family in the 19th century.

George  by Alex Gino. A 5th grade girl struggles with her gender identity and how to explain it to her friends and family.

The Cat Who Went to Heaven by Elizabeth Coatsworth, illustrated by Raoul Vitale. A quiet book about a Japanese man and his cat. Interspersed with poetry, the text is imbued with Buddhist teachings.

The Hero's Guide to Saving Your Kingdom (series) by Christopher Healy. Fairy tales get turned upside-down in this hilarious series in which princes and princesses set out to make a name for themselves.

Rickshaw Girl by Mitali Perkins, illustrated by Jamie Hogan. Naima figures out a way to earn money for her family in Bangladesh.

The Mighty Miss Malone by Christopher Paul Curtis. Spunky and immensely likable Deza struggles through the Great Depression when she, her mother and brother set off to find her father after he disappears.

The Family Fletcher (series) by Dana Alison Levy. A hilarious tale in which a diverse family, both in personality and ethnicity, navigates the perils of family life and school.

Love That Dog by Sharon Creech. Jack learns how to express himself with the help of a sensitive teacher, his dog and poetry.

The Whipping Boy by Sid Fleischman. An uppity prince and his whipping boy become embroiled in a kidnapping plot with comic results.

Under the Egg byLaura Marx Fitzgerald. Theodora roams around New York City to solve the puzzle of a mysterious painting left to her by her grandfather.

How to Eat Fried Worms by Thomas Rockwell. A classic tale about a disgusting dare.

Where the Mountain Meets the Moon (series) by Grace Lin. This is most likely on all the "Best Books for Kids" lists, but most of the parents I talk to have never heard of it so I feel compelled to include it!

Must Read Chapter Books ages 9 and up 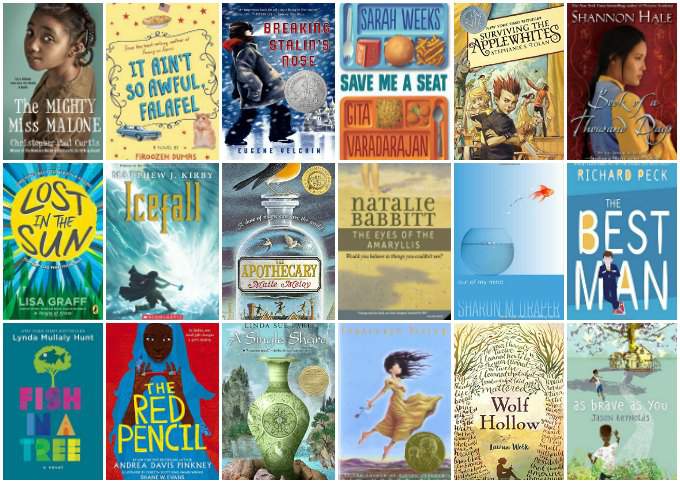 Eyes of the Amaryllis by Natalie Babbitt. A rather haunting but classic tale about a girl waiting with her grandmother for a message from the sea. This book will stick with your kids forever.

Surviving the Applewhites by Stephanie S. Tolan. A very funny story about a misfit theatrical family and the rebel foster kid who comes to stay with them.

The Best Man by Richard Peck. This author is well known for his book, A Long Way From Chicago, but this newest release from him about a boy learning about the men he considers his role models.

The Red Pencil by Andrea Davis Pinkney, illustrated by Shane W. Evans. A verse novel about Amira who faces war horrors in Sudan.

The Apothecary (series) by Maile Meloy. A suspenseful, thrilling series set during the Cold War. Two friends seek to uncover the mystery surrounding an apothecary's book.

Fish in A Tree by Lynda Mullaly Hunt. Ally is skilled at hiding her inability to read, but a sensitive teacher and a diagnosis gives her a fresh start.

Icefall by Matthew J. Kirby. Solveig and her siblings are trapped, along with the king's guard, a group of warriors known as the berserkers in a fortress during a winter storm. Solveig attempts to uncover the traitor amongst them.

Esperanza Rising by Pam Muñoz Ryan. A coming of age story in which Esperanza and her family fall on hard times in Mexico during the Great Depression and immigrate to California.

Lost in the Sun by Lisa Graff. After a terrible accident Trent is suffering from guilt. An unlikely friendship with a rather mysterious girl helps him to move on.

Wolf Hollow by Lauren Wolk. A compelling story. Annabelle befriends the local hermit and must stand up to bullies to do the right thing.

Book of a Thousand Days by Shannon Hale. Dashti, a servant to a princess locked in a tower narrates her imprisonment, correspondence with a prince and her eventual escape and journey to the nearby kingdom.

A Single Shard by Linda Sue Park. An absolutely fascinating story set in medieval Korea about an orphan who becomes a potter's apprentice.

As Brave as You by Jason Reynolds. 11 year old Genie and his brother travel from Brooklyn to rural Virginia to spend the summer with their grandparents.

It Ain't So Awful Falafel by Firoozeh Dumas. In 1970s California a young Iranian immigrant figures out how to be American without rejecting her heritage. Both funny and moving.

Out of My Mind by Sharon Draper. An incredibly moving story about a girl breaking out of the confines of her disability.

Breaking Stalin's Nose by Eugene Yelchin. A surprisingly funny tale of a boy who starts to doubt the authority of the USSR in the time of Stalin.

Masterpiece by Elise Broach, illustrated by Kelly Murphy. An artistically talented beetle and a boy solve an art mystery.

The War that Saved My Life by Kimberly Brubaker Bradley. Ada and her younger brother Jamie, escape a cruel mother when they are evacuated to the English countryside during WWII.

Want to keep up with our famous Monday book lists? Subscribe to our newsletter.

Other book lists in this series:

And if you absolutely must have a standard list of the top 100 books, you can check out this terrific list at SLJ, which I would certainly agree are also essential chapter books for kids! 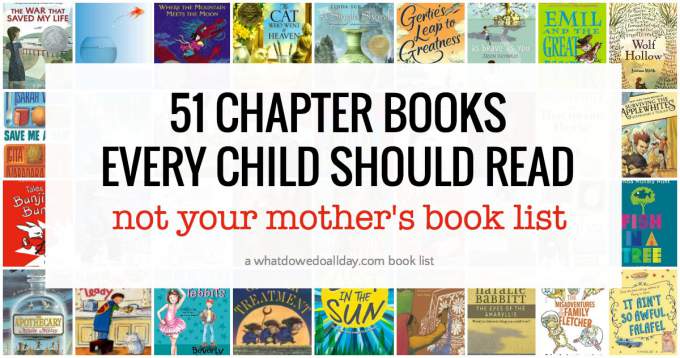 Subscribe to our newsletter and as a thank you, receive 10 waiting games kids can play anytime anywhere.
Your email will *never* be shared or sold to a 3rd party. Click here to view our privacy policy.
« Children's Book Coloring Page: Aunt Lilly's Laundromat
Game of the Month: Mancala »
76956 shares