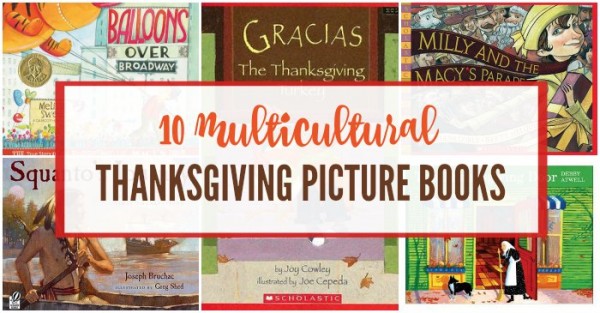 It’s very important to me to not just discuss the historical First Feast with my kids but what Thanksgiving means to contemporary families. One of my favorite features of the books I’ve included is that they demonstrate how immigrants and a variety of cultures have contributed to modern day traditions like parades and food choices. Kids who are reading independently may enjoy selections from my Thanksgiving chapter books list, and families will love these Thanksgiving audiobooks.

(Note: These titles were personally chosen by me because my family loves them. Titles and covers are affiliate links.)

Squanto’s Journey: The Story of the First Thanksgiving. This is the only title here with an account of the first Thanksgiving. Bruchac has written a number of stories based on Native American folktales and here he deftly tackles historical events. The story is told from Squanto’s point of view. Squanto is kidnapped and taken as a slave to Spain; he eventually escapes with the help of Spanish Friars, and makes his way home. Back home he intercedes between his people and the English, demonstrating an optimistic faith that the two groups can live as friends and ultimately helps the Pilgrims to survive in their new home. I recommend this book for ages 7 and up. The complexities are best understood by older children. (November is also Native American Heritage Month.)

Duck for Turkey Day. Tuyet is distressed that her Vietnamese family is having duck for Thanksgiving dinner! In school she learned that turkey is the traditional main course, but her mom and grandma insist that duck is tastier. Tuyet worries about what her friends and teacher will think! When she returns to school she discovers that her classmates all had different foods for dinner and that, in fact, it’s not the feast but the company that makes the holiday special. I love the sweet moment when Tuyet puts her handmade pinecone craft on the table to ensure there is a turkey on the table!

Milly And The Macy’s Parade. This is a fictional story based on a factual events surrounding the very first Macy’s Parade. Milly is a Polish immigrant whose father works for Mr. Macy. Macy’s employed legions of immigrants and when they all begin to get homesick and nostalgic for their homelands’ holiday traditions, Millie convinces “the most important man in America” (aka Mr. Macy) to throw a giant party – hence the parade is born. I love to think of the Macy’s Parade as a party with roots based in celebrating the diversity of the people employed at the store — not just as a way to advertise a retail giant.

Balloons over Broadway: The True Story of the Puppeteer of Macy’s Parade. This may seem like an unusual choice for a list of multicultural Thanksgiving books. However, the signature spectacle of the Macy’s Parade was actually spearheaded by British immigrant, Tony Sarg. Sweet’s marvelous cut paper and mixed media collages illustrate the story of Sarg’s life as a puppeteer, from his boyhood inspirations to his invention of the “upside-down marionettes” we’ve come to know and love as the iconic gigantic helium balloons in the Macy’s Parade.

How Many Days to America?: A Thanksgiving Story. A family flees a Caribbean island because of political prosecution. The journey in a small boat is hard and dangerous and when they reach America it is Thanksgiving day. This is a better choice for older kids because the subject matter is serious (the refugees are shot at by soldiers) but will spark good discussions about diversity in America, why people (including Pilgrims!) flee their own countries and the freedoms they hope to find in their new home.

Gracias The Thanksgiving Turkey. This is such a fun read. Just before Thanksgiving, Miguel’s father, who is driving a truck across the country, sends the family a mysterious box with holes in it.  Inside, of course, is a gobbling fowl. Miguel names his new “pet” Gracias, walks him around his urban neighborhood on a leash and worries about his intended fate, even as Gracias follows him to mass. Spanish words are sprinkled throughout the text and I love how Miguel’s Puerto Rican family provides a wonderful example of familial support and love.

Molly’s Pilgrim. Molly’s Jewish family has recently immigrated from Russia. Sadly, Molly’s classmates make fun of her accent, clothes and even her looks. Molly receives support, however from her mother and her teacher who, when the class puts on a Thanksgiving performance, helps Molly see herself as a modern-day Pilgrim. This is a great book to discuss differences and the importance of empathy for others who are struggling with change and feeling like outsiders.

Rivka’s First Thanksgiving. Rivka, the daughter of Polish Jewish immigrants, comes home from school one day excited to tell her family about the holiday of Thanksgiving.  Her mother tells her, “It sounds to me as though this is a party for Gentiles.” Rivka insists that Thanksgiving is for everyone and takes her case to the Rabbi who initially agrees with her mother! Rivka starts a campaign to change the Rabbi’s mind. She writes a letter and presents her case before a gathering of Rabbis, drawing insightful parallels between her Jewish family’s experience and the experience of the Pilgrims.

The Thanksgiving Door. Ed and Ann have burned their dinner! They head out to a restaurant, sighing, “It won’t be the same.” When they get there they don’t realize it’s closed for a private party but the grandmother in the kitchen decides the family will welcome the interlopers because in the “old country” they do not turn away hungry people. Ed and Ann celebrate with the large, extended Russian family (I’m assuming Russian, it’s never stated), including lively dancing and at the end of the evening declare the best thing that happened was burning the dinner.

‘Twas the Night Before Thanksgiving. Ok, so this one is not about immigrants or Native Americans, but instead it is an extremely silly and highly satisfying story about a diverse group of school children on a field trip to discover where their Thanksgiving turkey really comes from. When they find out, they smuggle the turkeys home and hilarity (and vegetarian dinners) ensues. It’s not as great well-written as Pilkey’s The Hallo-Weiner, but still — lots of fun. 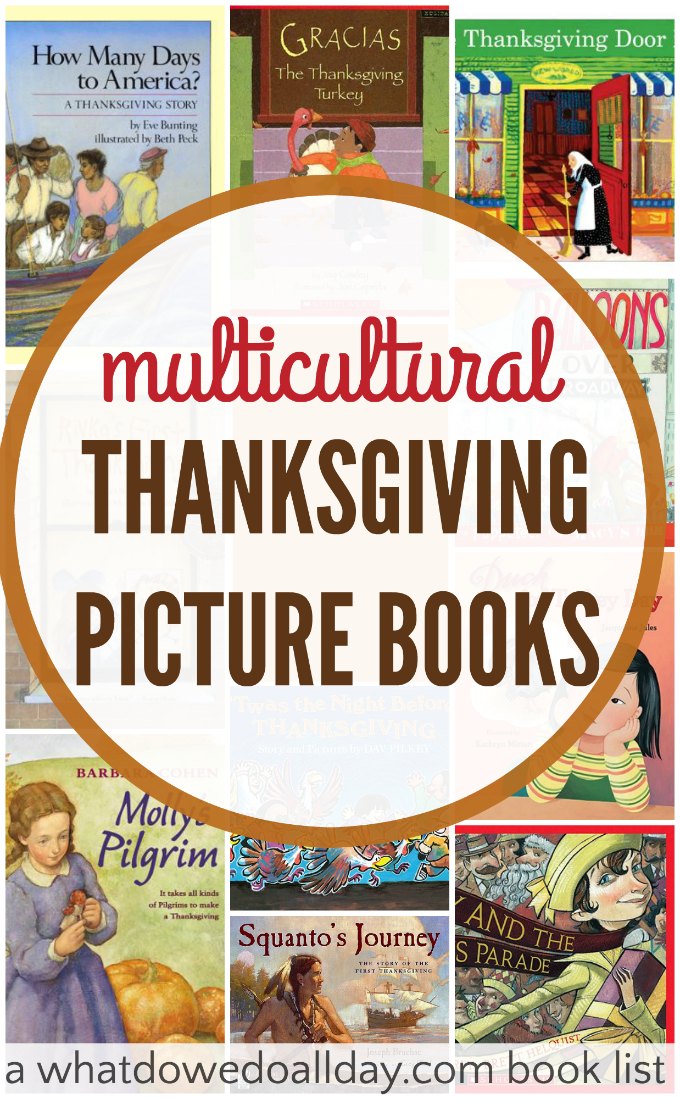 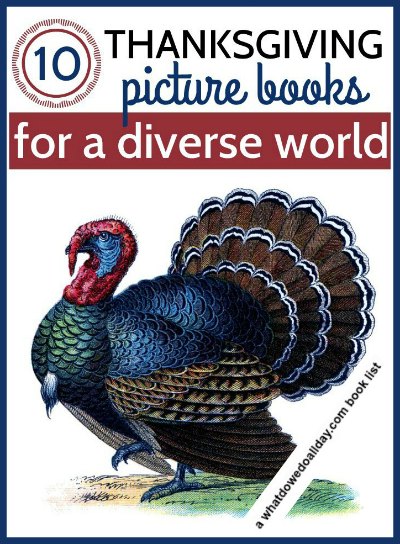 Subscribe to our newsletter and as a thank you, receive 10 waiting games kids can play anytime anywhere.
Your email will *never* be shared or sold to a 3rd party. Click here to view our privacy policy.
1141shares
« Classic Outdoor Fun: Rolling Down the Hill
Election Day Activity for Kids: Voting »