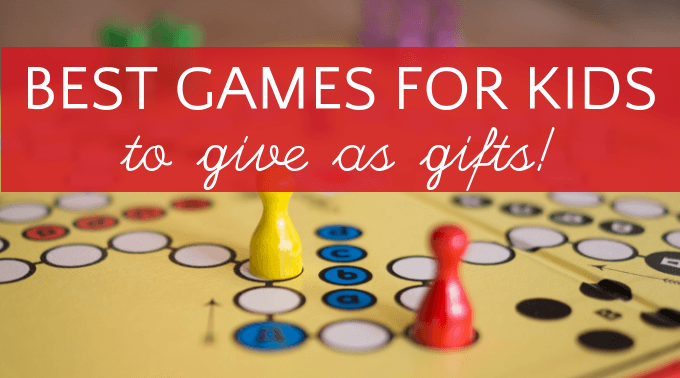 Our family is a wee bit  game-crazy and consequently we think games make great gifts (say that three times fast). My friends know this and frequently ask me for games recommendations.

The perfect game for kids has several qualities:

If you are looking for a good family game gift take a look at these suggestions. I know you’ll find something you like! (Note: images and links may be are affiliate links. As an Amazon Associate I earn from qualifying purchases.)

I included several types of the best games, so you can scroll down if you are looking for something specific:

**TIP: My #1 game recommendation is listed under Games that Rely on Strategy and Logic. 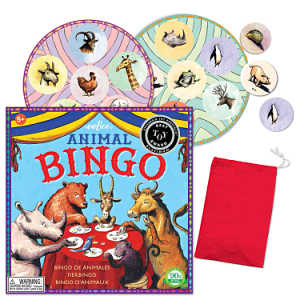 Animal Bingo. Bingo has the unusual good fortune of being a game that young children can play with their older siblings. Originally I thought I’d be bored playing this game with the kids, but it was surprisingly fun, which I suppose is why these classic-type games stand the test of time to become, well… classics!  I LOVE these eeBoo versions because of their lovely graphics, often done by well known children’s book illustrators like Keven Hawkes and Melissa Sweet. You could also try:

Richard Scarry Busy Town:  Eye Found It!. What I like best about this game is that siblings and friends work cooperatively to find objects on the board and solve the puzzles. The addition of magnifying lenses is a fun touch. The board is huge, six feet long, so you can play on the floor: perfect for kids who have a hard time sitting still in chairs at the table. This game has won tons of awards.

Hoot Owl Hoot. This is a cooperative game with simple rules and although it is designed for preschoolers my 9 year old still requests it with great frequency! I love cooperative games because when everyone works together no one child can gloat over winning and no one gets upset over losing. Cooperative games have been a life saver as we have worked on good sportsmanship. 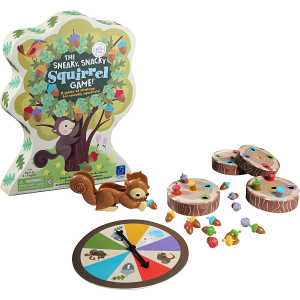 The Sneaky Snacky Squirrel Game has become a modern classic game for preschoolers and is an excellent choice should you wish for a break from Candy Land and Chutes and Ladders! It also teaches color recognition, works fine motor skills and develops early strategic thinking.

The great advantage to giving card games as gifts is that they are very inexpensive so you get more bang for your buck. I consider the following four card games absolutely essential for every family!

Somehow Uno NEVER gets boring. So easy to learn and quick game play means you can’t resist playing several rounds in a row. We’ve played this game so much we bought ourselves a second deck! If you don’t have this game, there’s no time like the present to add it to your collection.

Skip-Bo is a classic sequencing card game for 2-6 players. It is simple to learn and play but skilled game player will use probability and logic to improve their chances of beating the pants off the rest of the family.

Phase 10. This is one of my older son’s favorite card games! One year he and my mother played the game about 25 times over the course of a week! It’s been around since the 1980s and I always know I can count on games that have stood the test of time. It is based on Rummy but with a clever twist. This is definitely a favorite in our house.

Rook is a classic game that I remember playing at my grandparents when I was young. You can play with 2 players but it is excellent for playing as teams. This fast-paced game involves bidding, tricks and trumps!

Games that Rely on Strategy and Logic

Rush Hour: Traffic Jam Logic Game. This is my #1 game recommendation when people ask me for a gift suggestion. Rush Hour appeals to kids who like cars and trucks (you may know one of those) and parents who want a game that helps build logical thinking and strategic spatial awareness. The player arranges the vehicles in a grid lock according to the challenge games in a deck of puzzle cards. Then player must move each vehicle one by one until he is able to drive the red car free of the traffic jam. It is primarily a solitary game (a trait appreciated by harried parents) but as the child tries to solve the higher level puzzles, parents can provide valuable assistance.

The game pictured above is for children ages 8 and up, but there is also ThinkFun Rush Hour Jr. for ages 6-8 (I think it is fine for older 4s and 5s, too, especially some of the lower level cards.) You can also get two player version.

Mancala. Absolutely every family should own this traditional game! Mancala is a game for two players and we’ve found that kids as young as 5 or 6 can learn how to play this counting game quite easily. Figuring out a winning strategy is not out of reach for younger children and the game is interesting enough for adults. There’s a reason it’s been played for thousands of years!

Gobblet Gobblers. There are several different versions Gobblet but I’ve chosen to feature this one on the left because it is a bit whimsical and slightly less expensive than the others. Gobblet looks like Tic Tac Toe but players pieces can move around, “gobbling” up smaller pieces. The game relies on strategic thinking and memory skills. Children ages 4 and up should enjoy this game, but if you are buying for a slight older crowd, I’d say go with the original.

Qwirkle. Qwirkle is one of our favorite games and I featured it as a Game of the Month. We often play without scoring but it takes a lot of strategic thinking to score big. Parents should note that game playing time can be long: up to 45 minutes. Depending on your point of view that may be an asset or a drawback. Little kids will have fun playing around with the tiles, but this is a game for kids 6 and up. If you feel brave, you can take on Qwirkle Cubes. Qwirkly won the Mensa Select Award, you can can feel super smart while playing it.

Double Shutter. Personally, I find this game highly addictive. Players take turns rolling the dice to “shut” number tiles. The object is to “shut the box” by rolling an exact combination of numbers matching the remaining tiles. This game can be played alone of with others. Although the manufacturer recommends this for ages 8 and up, if your child can break down the number 12 into sums he can play.

Yamslam. Yamslam is similar to classic Yahtzee, but with a slightly different strategic edge. Players should be able to know how to add. This game is also fun for parents.

Sumoku. Sumoku is what you get when you merge sudoku, a crossword puzzle, Qwirkle, Scrabble, and arithmetic. Yes, I know. That description sounds AWESOME, right? The instructions include five different versions so you won’t get bored. Players create rows of numbers in which the sum totals a multiple of the key number, determined at the beginning of the game. Players then take turns adding on to the rows in a manner similar to Scrabble.

Games for Trivia and Information Lovers

Scrambled States of America Game Card Game. It is an understatement to say my oldest son loves this game. Based on the book of the same name (pairing the book and game would make a great gift), players try to collect as many states as possible by matching the cards they are dealt with the clues given during each turn. Players do need to have good reading skills to play this game. The manufacturer suggests ages 8 and up but if your child can read at a younger age he or she can probably play this game.

Professor Noggin. The Prof. Noggin games are for hard core fact loving kids. There is not a lot of game play involved above rolling the dice. However, the advantage is that there are a million subjects to choose from including such narrow topics like birds, outer space and “wonders of the world.” 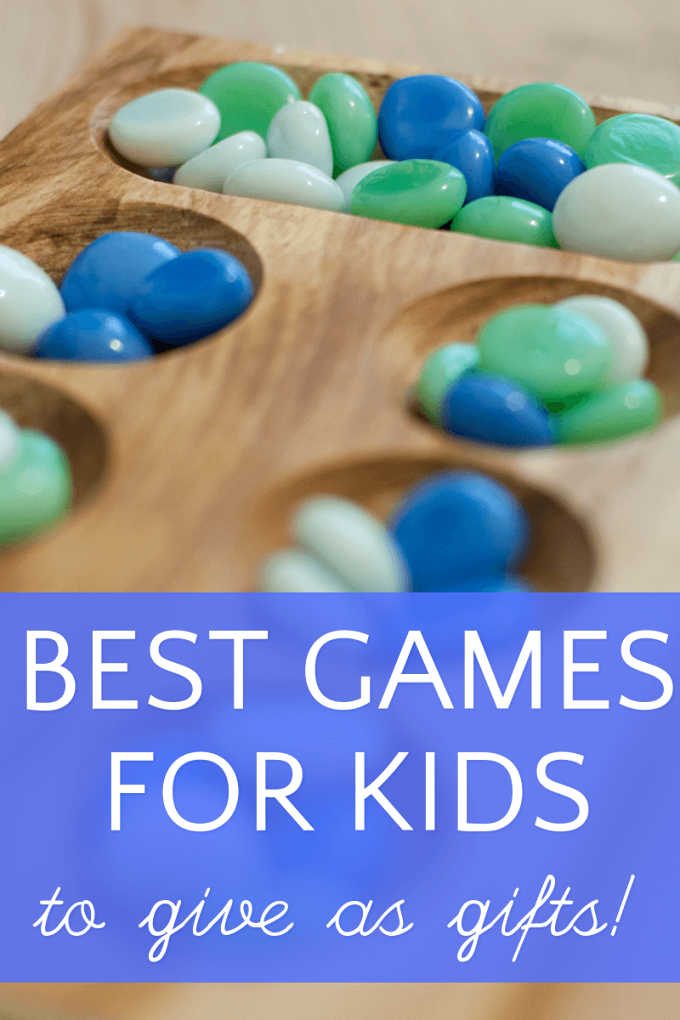 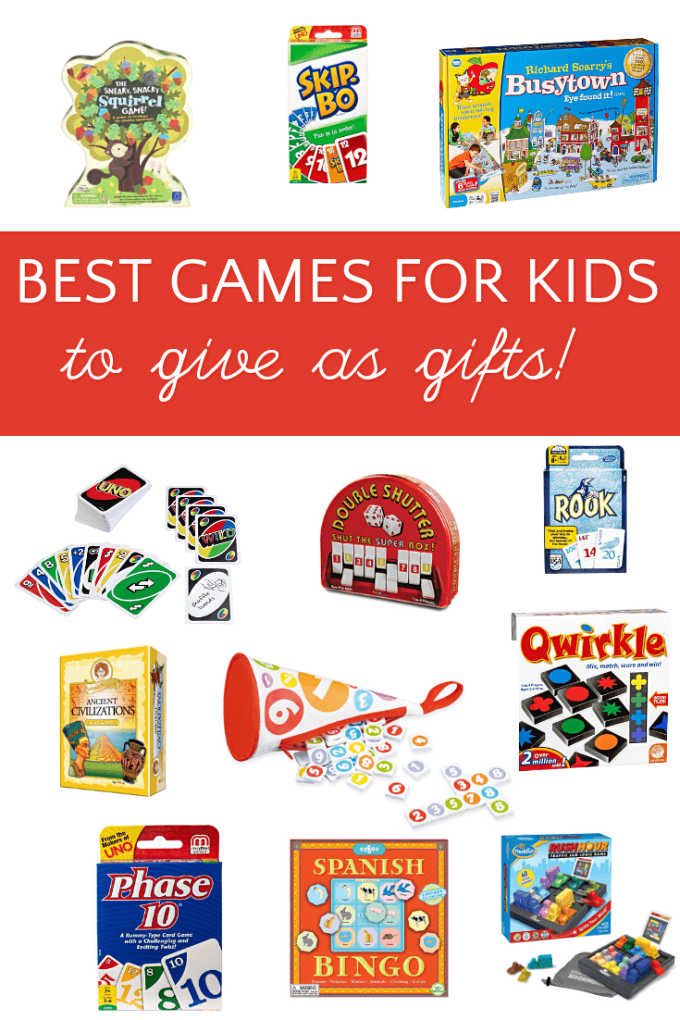 Subscribe to our newsletter and as a thank you, receive 10 waiting games kids can play anytime anywhere.
Your email will *never* be shared or sold to a 3rd party. Click here to view our privacy policy.
919 shares