Shall I tell you a secret? My favorite series on this site is the seasonal family read aloud book lists. I thought maybe I had exhausted my options of themes, but I realized, a ha! How about a list of Halloween novels? The whole family can gather 'round a bowl of mini candy bars and listen to the matriarch or patriarch read a chapter book with a Halloween theme. Sound good? I thought so.

You should know I am not a horror fan. I don't like scary movies and I don't usually like scary books. To accommodate those of you with weak constitutions like mine, this list is separated into scary and non-scary Halloween books. (Note: book titles and covers are affiliate links.)

The Little Leftover Witch by Florence Laughlin. I haven't read this one since I was a kid, but I did love it then and I am eager to read it aloud this month!  Mischievous Felina is a young witch and one Halloween she breaks her broom and can't get back home. She spends a year with a mortal family learning all about what it means to be loved.

Jenny's Moonlight Adventure by Esther Averill. Jenny and her urban feline friends gather together on Halloween to hear a performance from nose-flutist Madame Butterfly. But, oh no! The nose flute has gone missing. This is a fantastic choice for a family read aloud if you have preschoolers at home. Not scary at all and very lovable characters.

Little Witch by Anna Elizabeth Bennett. Published over 60 years ago, this book still enchants me. Minikin, a nine year old witch, wishes she were an ordinary mortal girl—not one with a witch for a mother. (I could make a joke about that, but I will resist) Her current goal is to conjure up a fairy, she starts a real school despite her mother's prohibition against it, and makes a mortal friend, Frances. A book with lots of magic, kindness and old-fashioned fun.

The Witch Family. Eleanor Estes (an author with multiple Caldecott honors to her name) penned this book about two seven year girls who create an elaborate story about an imaginary "Old Witch." They decide that Old Witch needs to start mending her wicked ways or else there will be no Halloween. The blurred boundary between reality and make-believe worlds is just what every child hopes for. Ages 8 and up.

The Worst Witch (series) by Jill Murphy. This series takes place at a  boarding school for magic kids. In the introductory novel, Mildred begins her first year by getting a black cat and a broom. Poor Mildred, however, is not exactly the most skillful, coordinated witch in her class and her cat is a tabby! She mixes up potions and spells causing all sorts of chaos (and fun, of course).

The Little Witch by Otfried Preussler. First published in 1957, it has been released in translation by the New York Review Children's Collections. After sneaking away from Walpurgis Night, the other witches take away Little Witch's broomstick as punishment. In order to get it back, she must exhibit witch-worthy behavior for a year. But the little witch finds out that she likes being a good witch much better! The way she manages to be a good witch in every sense made for a very satisfying ending.

Invisible Inkling: Dangerous Pumpkins by Emily Jenkins. I adore this series by favorite author Emily Jenkins (set in Brooklyn, of course!). This is the second book about fourth grader Hank Wolowitz whose has invisible pet bandapat named Inkling. Inkling has a sweet tooth for squash and especially pumpkins. This causes no end of trouble for Hank as he tries to keep Inkling from eating the Halloween decorations. Quirky, kooky and all kinds of fun.

The Best Halloween Ever by Barbara Robinson. The chaos-creating band of kids from the classic, The Best Christmas Pageant Ever, bring just as much mayhem and laughs to Halloween as they did to Christmas.

No Such Thing as a Witch by Ruth Chew. The Matter of Fact Magic series is back in print and you could pick any one of them up for a magical holiday read. Nora and Tad have a new neighbor who loves animals and whose delicious fudge has magical properties. But there's no such thing as a witch! Or is there?

Bunnicula: A Rabbit Tale of Mystery (series) by Deborah and James Howe. I remember all the kids talking about this book when I was growing up. It's is told from the viewpoint of Harold the dog, which makes for some fun read aloud moments. Bunnicula is a vampire rabbit who sucks the juice from—wait for it—vegetables.

The Dollhouse Murders by Betty Ren Wright scared the bejeezus out of me when I was a kid. I am still freaked out thinking about it! Amy hears mysterious sounds coming from her dollhouse at night and her Aunt Claire is exceeding distressed about the dolls. Amy wonders if the dolls have a connection to the murders of her great-grandparents. If your kids like a good scare, this is the book to read this Halloween.  Best for families with kids ages 10 and up.

The Graveyard Book by Neil Gaiman. (Newbery Award winner) This is a wonderful, beautifully written book, bittersweet and magical, but best for families with kids ages 10 and up.  Nobody Owens, or Bod as he is known, was supposed to be murdered the night his parents were. But as a toddler, he managed to escape. Now he is being raised by ghosts and lives in the graveyard.

Ghosthunters and the Incredibly Revolting Ghost (series) by Cornelia Funke. We read Funke's Santa book at Christmas, so it's only natural we would turn to her at Halloween, too! Nine year old Tom becomes an apprentice ghosthunter after finding a ASG (Average Spooky Ghost) in the basement. Lots of fun, and also a good independent read for kids ages 7-10.

The Witches by Roald Dahl. When I was a kid, this is another novel that scared the bejeezus out of me. Other kids may not feel the same way, but the whole idea of witches turning little kids into mice did not sit well with me. Perhaps your kids will feel otherwise. Nevertheless, this book has all of Dahl's wonderful trademark weirdness.

A Tale Dark and Grimm by Adam Gidwitz. (Trilogy) There is definitely some dark imagery in this subversive re-imagining of Hansel and Gretel. A sly and snarky narrator offers warnings, observations and opinions on the action.  This story in which the siblings journey on to try and find a set of decent parents somehow manages to merge 8 different Grimm fairy tales into one cohesive tale. An engaging story, but not for the faint of heart. Ages 8 and up.

Doll Bones by Holly Black. (Newbery Honor Book). Three kids, Poppy, Alice and Zach have spent their childhood in make-believe worlds and adventures in which a bone china doll is The Great Queen. When Zach's father forces him to stop playing, Poppy says that the doll is actually made from the bones of a dead girl, Eleanor, and that the three kids must give her a proper burial so Eleanor can finally be put to rest. Best for families where all the kids are ages 9 and up.

The Night Gardener by Jonathan Auxier oozes atmosphere may remind you of a good Victorian gothic novel. I might not have picked it up were it not for this Halloween novels book list! The Night Gardener is a malevolent spirit that haunts the grounds of an old English manor house. Two Irish siblings, trusty Molly and courageous Kip meet the Night Gardener and become embroiled int the strange, creepy curse that envelops the place. It will be a good spooky choice for family Halloween reading if everyone is over the age of 10. 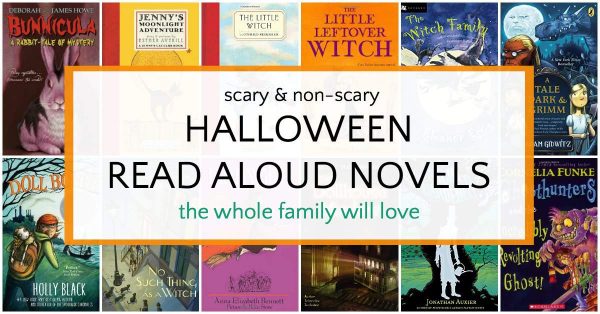 Subscribe to our newsletter and as a thank you, receive 10 waiting games kids can play anytime anywhere.
Your email will *never* be shared or sold to a 3rd party. Click here to view our privacy policy.
« Children's Picture Books about Protest and Civil Disobedience
Fantastic Graphic Novels for Kids (3-5th Grade—and up!) »
1135 shares