Do you share poetry with your kids? Even if you are a dedicated read-aloud parent, it is easy to overlook poetry. Haiku books for kids are a good place to start, especially as National Poetry Month is right around the corner. Poetry has played a very calming and joyful role in our home, and I know it can do good things for you, too. 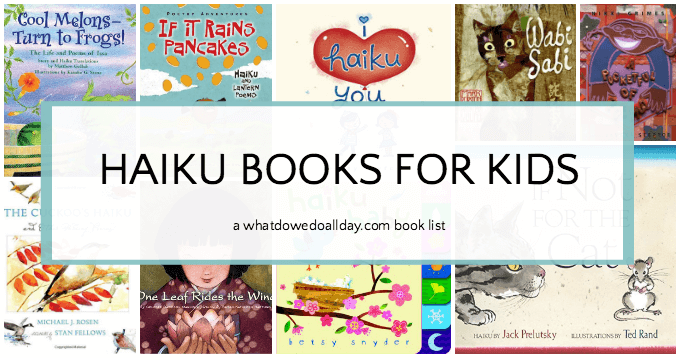 One year during our interminable walk to school every morning, my son and I passed the time by composing Haiku. On a whim one morning I explained the 5-7-5 syllable structure with some examples of haiku poems I composed on the spot (they were very bad). I described how the subject of haiku is nature but truth be told, it was the mathematical component that hooked his interest! Some of the poems we compose on our walks are really silly but I loved our quirky morning ritual.

The following books are all lovely collections of haiku poetry you can share with your kids. I know these books will inspire your kids to write haiku so be sure to read our haiku poetry challenge! (Note: book covers and titles are affiliate links)

GUYKU: A Year of Haiku for Boys by Bob Raczka, illustrated by Peter H. Reynolds. I truly adore this book, partly because being a mom of two boys I recognize the spirited and mischievous nature of boys so aptly translated to the haiku form. (That’s not to say girls are spirited and mischievous, but I don’t have daughters. If you’re a girl and want to protest you can do so at the Guyku website!)

Hi, Koo!: A Year of Seasons by Jon J. Muth. With our love of poetry, the boys and I have been enjoying this book of haiku about the seasons. There is a bit of whimsy in both the pictures and poems that is quite appealing. Muth’s signature illustrative style is just as dreamy and wonderful as in his other books.

The Cuckoo’s Haiku: and Other Birding Poems by Michael J. Rosen, illustrated by Stan Fellows.  The watercolor illustrations are gorgeous and birds are divided into season, which is perfect for enthusiastic birders.

One Leaf Rides the Wind by Celeste Mannis, illustrated by Susan Kathleen Hartung. A child’s love of the Japanese Garden is the inspiration behind this collection of haiku poetry which is also a counting book. Cleverly, the poems follow the girl’s journey through the garden as she discovers and admires its delights.

A Pocketful of Poems by Nikki Grimes. Young Tiana has pocketful of words and each word inspires two delightful short poem – one in free verse, one as a haiku. This is a wonderful book to explore how inspiration can take many forms! Grimes writes that she thought it would be “…fun to read haiku poetry with contemporary images that I could relate to as a Harlem-born city girl.” I think she succeeds marvelously.

Haiku Baby and Haiku Night by Betsy E. Snyder. This is a darling board book with 6 haiku poems about nature. I really loved how Snyder uses onomatopoetic words which naturally appeal to babies and the collage illustrations are colorful and sweet.

I Haiku You by Betsy Snyder. This is another lovely collection by Snyder. Each haiku is an expression of love and affection: super-sweet but not saccharine.

Won Ton: A Cat Tale Told in Haiku by Lee Wardlaw, illustrated by Eugene Yelchin. An entire story told in haiku? Awesome! This is the story of a shelter cat and his new adopted life. With bold illustrations, this is a wonderful, funny and unique book. After you’ve read this one, be sure to catch the new Won Ton and Chopstick: A Cat and Dog Tale Told in Haiku.

Dogku by Andrew Clements, illustrated by Tim Bowers. I bet you didn’t know the author of Frindle wrote haiku. Me neither. Short poems for your little dog lover.

If Not for the Cat by Jack Prelutsky, illustrated by Ted Rand. If you need an animal haiku book then you should definitely check out this offering from Jack Prelutsky. Each poem is not just a haiku but a riddle to be solved. The answer to each riddle-haiku is revealed in Ted Rand’s exquisite illustrations.

Today And Today by Kobayashi Issa, illustrated by G. Brian Karas . 18th century Japanese poet Issa’s haikus are given a fresh life for kids in this collection. Organized by season and accompanied by winsome illustrations from one of my favorite illustrators (I have a lot of favorites, actually).

Wabi Sabi by Mark Reibstein, illustrated by Ed Young. I don’t know what it is about haikus and cats, but here is another selection that pairs the two. A cat named Wabi Sabi sets off on a journey to find the meaning of her name and along the way discovers ways of seeing beauty in simplicity, an important concept in Zen Buddhism and also the meaning of his name. The story is accompanied by haikus that act as both punctuation marks in the story as well as moments in which the cat learns how to see beauty in simplicity.

Cool Melons – Turn To Frogs!: The Life And Poems Of Issa.  Story and translations by Matthew Gollub, illustrated by Kazuko G. Stone. Gollub tells the story of Issa, an 18th century Japanese poet. Issa’s own haiku are woven into the story his journey from his difficult childhood to that of celebrated artist Stone’s illustrations are a delight and wonderfully reflect Issa’s thoughtful, short poems.

Guess Who Haiku by Deanna Caswell, illustrated by Bob Shea. A guessing game in haiku poetry for babies and toddlers! Lots of fun.

If It Rains Pancakes: Haiku and Lantern Poems by Brian P. Cleary, illustrated by Andy Rowland. Look at that cover! I love it! If you are just about getting haiku-ed out, try mixing it up with another Japanese poetry form: the lantern poem. 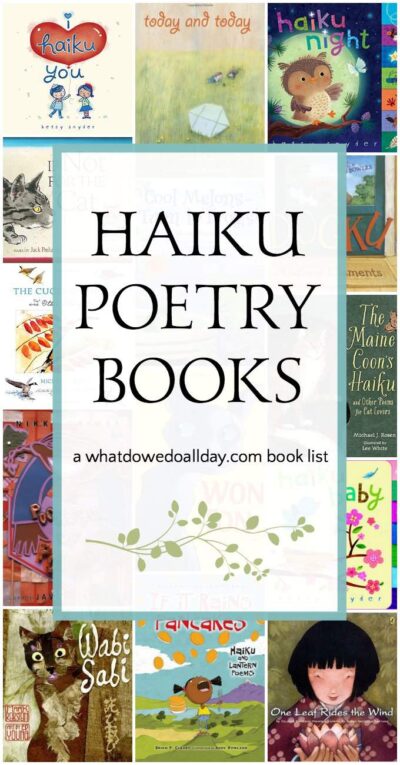 Subscribe to our newsletter and as a thank you, receive 10 waiting games kids can play anytime anywhere.
Your email will *never* be shared or sold to a 3rd party. Click here to view our privacy policy.
9388shares
« Best Books to Inspire Your Sports-Obsessed Kids to Read
The Trick to Making Bedtime Peaceful and Memorable »