I've been asked many times for a list of good graphic novels for kids. So I'm putting together a series of books lists, starting with graphic novels for 3-5th grade (although in retrospect, I'm going with 3-6th grade). I've put it off for so long and the reason is simple. I have a hard time reading graphic novels. My kids love them, of course, but I find my mind wanders when I read them. I suppose that is because how I've trained my brain to read. 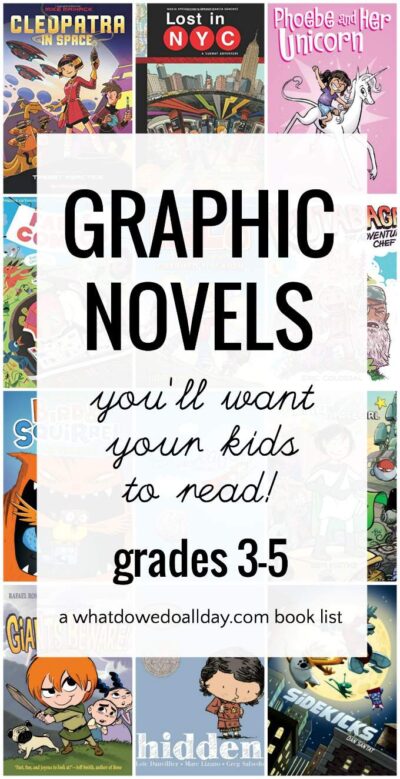 You may have heard arguments about how graphic novels are somehow "lesser" than traditional books. My advice? If your kids likes graphic novels, let them read them as much as they want. As in all forms of literature, there are good books and not-so-good books. I read Sweet Valley High like candy when I was a kid, and all of the books on this list are of higher quality than that that series (ah, but I loved it so), so there you have it. (Note: book covers and titles are affiliate links)

Do your kids have a penchant for graphic novels? Do you harbor a secret prejudice against them like I used to?

Look for more lists in this series!

Hidden: A Child's Story of the Holocaust by Loïc Dauvillier, Greg Salsedo, and Marc Lizano. This is an extraordinarily touching book, and a very child-appropriate tale of the Holocaust. Dounia tells her granddaughter her experience of being hidden during WWWII in France when her parents were taken to concentration camps.  The brilliance of this book is we hear and see the story from the viewpoint of both child and grandparent, with key points told through illustrations that compel the reader to ask more questions and analyze for themselves what is happening. If you've ever felt graphic novels were a "lesser" form of literature, I urge you to read this book.

Hilo (series) by Judd Winick. Both my kids love Hilo! My seven year old, in particular, is eager for the third book to come out. Hilo is a kid who comes crashing down to earth. At first he can't quite remember who he is, but it's clear he's different from his new friends, D.J. and Gina. The story emphasizes the importance of friendship and contains a lot of humor. The first book ends with a cliffhanger that will have readers reaching for the next book in the series.

Zita the Spacegirl (series) by Ben Hatke is a popular graphic novel for kids. Zita rushes off to space in order to save her friend who has been abducted by aliens. Space turns out to be inhabited by some seriously bizarre, but entertaining creatures. There is a bit of a Wizard of Oz like feel to Zita's quest and the series is tons of fun.

Giants Beware (Chronicles of Claudette series) by Jorge Aguirre and Rafael Rosado. Claudette dreams of being a courageous knight and slaying a dragon. Her surly father, a blacksmith who lost his legs in a dangerous quest, doesn't want her to leave the village. With the companionship of her friend Marie and her brother Gaston, she defies his wishes and heads out for adventure. The cast of characters in this series is incredibly lovable and quirky.

Bird and Squirrel (series) by James Burks. Bird and Squirrel are a hilarious duo that will have your kids rolling with laughter. Bird is adventurous and carefree, Squirrel is more conservative and fearful. In the first book, Squirrel is getting ready for winter and Bird is being chased by a cat. Squirrel comes to Bird's rescue but in doing so his hard-earned acorn stash is ruined.

Cleopatra in Space (series) by Mike Maihack. I had heard a few good things about this series, so I took a leap and ordered it sight unseen for my son to keep him occupied during a trip. He loved it! The historical Cleopatra learns of a prophecy in which she is destined to save the galaxy. She is transported to a planet, far into the future and enrolls in school. She is a bit of a troublemaker, there is lots of action, a few laughs and extra amounts of fun.

Phoebe and Her Unicorn by Dana Simpson. (Series) After accidentally bopping a unicorn (named Marigold Heavenly Nostrils) in the face with a skipping rock, Phoebe gets a wish. She wishes for the unicorn to become her best friend! Even if your kids aren't into pink and sparkles they will love this book in which two lonely creatures forge a friendship.

El Deafo by Cece Bell is a graphic novel memoir narrated by Cece, who loses here hearing due to spinal meningitis. A very funny and charming book about the experiences, imaginings and wishes of a deaf girl (actually everyone is a rabbit). Although the story will help hearing kids to see challenges of the deaf, they will also see similarities.

Fable Comics by multiple authors is a fun addition to this list of graphic novels for kids. Classic stories from Aesop are turned into short comics. Follow up this volume with Fairy Tale Comics and Nursery Rhyme Comics.

Lost in NYC: A Subway Adventure by Nadja Spiegelman and Sergio García Sánchez. Pablo and his classmates go on a field trip to NYC but Pablo gets separated from the group. The book includes loads of interesting information about the subway and its history and both NYC and non-urban kids will love this book.

Rutabaga: The Adventure Chef by Eric Colossal. Sadly, I have to report  that a hero named after a much maligned root veggie didn't get my child to eat his broccoli. Rutabaga has a magic cooking pot and he spends much of his time trying to get others to try adventurous new dishes. The stories are a little bit silly and not too deep and meaningful but your kids will have fun reading the graphic novel and may even decide to try one of the recipes at the end.

Sidekicks by Dan Santat. This was one of the first graphic novels I checked out for my kids a few years ago when I was trying to find alternatives to licensed character superheroes. It was a big hit with my kids. Captain Amazing is getting up in years and decides he needs a sidekick. Who would be best for the job? It turns out his four pets each think they would make the best sidekick! Great fun with bold, colorful graphics.

Subscribe to our newsletter and as a thank you, receive 10 waiting games kids can play anytime anywhere.
Your email will *never* be shared or sold to a 3rd party. Click here to view our privacy policy.
« Scary & Non-Scary Halloween Novels for Family Read Aloud Time
Creative Family Memories in a Box »
2547 shares