Are you ready for books to blow apart the myth that graphic novels are good books for kids? This list of graphic novels for grades 4 through 8 contains a variety of titles and you are sure to find something for either your voracious or your reluctant reader. 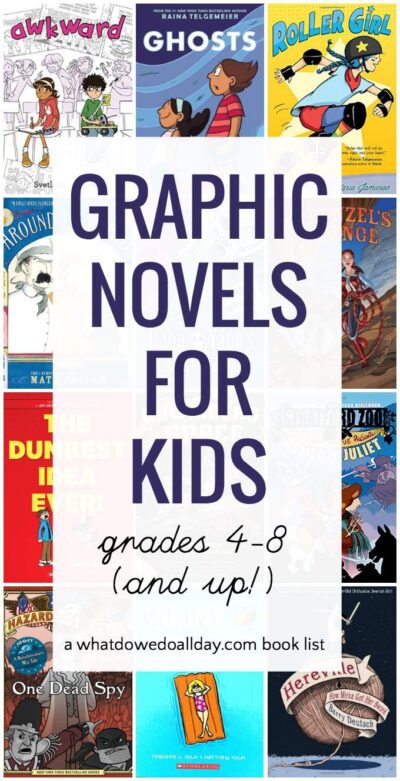 The Stratford Zoo Midnight Revue (series) by Ian Lendler, illustrated by Zack Giallongo. My 11 year old read this and immediately gave it to me, "This one's really good. You should read it to my brother." Well, I don't normally real graphic novels aloud, but my youngest read it on his own. I wasn't sure to expect because I'm not always a fan of the  "Shakespeare for kids" type of book, but this story pit the farmyard animals against the wild animals—Romeo is a rooster and Juliet is a bear—with a backdrop of silly audience commentary. I won't give away the ending, but not to worry, everyone survives.

Ghosts by Raina Telgemeier. Catrina's sister, Maya, has cystic fibrosis and so the family is moving to Northern California with its beneficial temperate climate. Their new neighbor informs the girls that there are ghosts in their town. The sisters react differently to the ghosts; Maya is intrigued, Catrina is fearful. Their reactions echo their fears about Maya's illness and prognosis.  UPDATE: I recently read a very important perspective on this book that I had overlooked - an important reminder that we must always continue to listen and learn. Read here about why Ghosts is not recommended.

I recommend wholeheartedly any book by Raina Telgemeier, including:

Awkward by Svetlana Chmakova. Peppi Torres is starting a new school and much to her dismay she trips in front of everyone! When another student tries to help her, the pair are teased and Peppi shoves him aside. It is a move she instantly regrets, and later she agonizes over how to apologize for her rudeness. The boy, Jamie, is in the science club, while Peppi and her friends are in the art club. The two clubs are at odds and when they are pitted against each other in a contest, things get tricky. Peppi tries to navigate the awkwardness of being friends with Jamie and her art club friends, as well as making honest choices. If your kids like realistic fiction, this graphic novel has a diverse cast, memorable characters and thoughtful plot points.

Hereville: How Mirka Got Her Sword (series) by Barry Deutsch. What's that, you say? You are looking for a graphic novel about an orthodox Jewish girl who dreams of slaying dragons? Well, you've come to the right place. This book is pretty wonderful. Mirka is 11 years old and not interested in the stereotypical "female pursuits." For example, she is a terrible knitter. The book opens with Mirka trying to convince her stepmother that God must want her to make kitting mistakes. When you see what role knitting plays in overcoming the terrible troll, you will probably agree with Mirka's assessment. One day Mirka finds herself in a kerfuffle involving wrestling a pig (although no one believes her, and what is a pig doing in an Orthodox community, anyway, they all say) but that's just the beginning. The whole book is wonderfully imaginative and I've put the second two titles on hold at the library!

Rapunzel's Revenge by Shannon Hale and Dean Hale. This was one of the first graphic novels I read. I read it several years ago, before I was really aware of the explosion of graphic novels as a children's book genre. I picked it up because I love Shannon Hale's novels. It is quite unlike the traditional fairy tale. Rapunzel takes ownership of her hair, frees herself, rejects the prince and goes on a quest to save her mother in the Wild, Wild West. Her sidekick is Jack—of beanstalk fame. Also by the same team: Calamity Jack

Hazardous Tales (series) by Nathan Hale. My 11 year old loves the Nathan Hale's historical graphic novels. The topics range from the Revolutionary War to the Donner Party, the Alamo to WW1 and more. As a narrator, Hale makes history fascinating and funny. If your kids say they aren't "into history" sneak a few of these books into their reading stash.

Roller Girl by Victoria Jamieson. Astrid signs up for roller derby and is disappointed when her best friend Nicole signs up for dance, instead—and with Rachel! The girl who teases Astrid! Astrid works on learning the roller derby ropes (she's not really that good, but that's okay) and figuring out who she is without Nicole. This is a truly wonderful book with a likable, memorable protagonist.

Sunny Side Up by Jennifer L. Holm and Matthew Holm. The Holm duo is responsible for the popular Babymouse series, which is good for the younger crowd. It's 1976 and Sunny is off to stay with her grandfather for the summer, in Florida. She meets Buzz, a local kid who is really into comics. The pair have some summer-y adventures involving golf balls but the backdrop is that Sunny has had to deal with some difficult family issues over the past year, including a brother who has substance abuse issues. Despite the seriousness of the topic, it is handled in a very age-appropriate way.

Around the World by Matt Phelan. I've always been fascinated by the story Around the World in 80 Days. When I was younger I loved playing the board game, "Nelly Bly". I wish I still had it! But I digress. Phelan takes the stories of three adventurers and mashes them into one epic circumnavigation. Phelan's artwork is different than a lot of the graphic novel on this list. It is lighter in feel, almost sketch-like. I also think the "feeling" of the book is less bold (for lack of a better word) that the others, despite the adventurous subject matter. It requires a bit more reading between the lines, and Phelan does address the downsides of traveling around the world. For that reason, I recommend it as for kids who already have a few graphic novels under their belt.

More historical graphic novels from Phelan your kids (and you!!!) will love:

The Dumbest Idea Ever by Jimmy Gownley. Here's a book that might be unfairly judged by the title. Gownley writes a memoir of his 13 year old self. He is a top student and star athlete. However, when he has to miss an important basketball game because of chicken pox things start to go downhill fast. While he is ill, he takes up drawing and writing comics. Funny and insightful, Gownley's graphic novel is a great book for tweens, who are figuring out how to grow up and be themselves. Gownley also wrote the graphic novel series, Amelia Rules.

Lowriders in Space (series) by Cathy Camper, illustrated by Raul the Third. You might not think that a space adventure would easily combine with Mexican car culture. Well, you'd be wrong! Lowriders is great fun and has a good message about working together and friendship. Lupe Impala, El Chavo Flapjack, and Elirio Malaria are a great team when it comes to fixing cars. Together they enter a contest to turn a hunk of junk into the best car in the solar system. This was a great one for my son who is starting to learn Spanish. A glossary in the back helps kids with the Spanish words sprinkled throughout the text.

Secret Coders (series) by Gene Luen Yang, illustrated by Mike Holmes. At first I wasn't sure what to make of this book. Hopper is the new kid at school and she starts things off on the wrong foot. She gets her hackles up when she gets into a tussle on her first day at the strange and creepy Stately Academy.  But the story really started to grow on me when Hopper and Eni team up to try and solve the mystery of the school. There are binary numbers to figure out, coding puzzles to solve  and computer programs to unravel. If your kids can spend hours on coding websites, convince them to enjoy some off-screen time while working on the same type of problems—but with a book.

Baba Yaga's Assistant by Marika McCoola, illustrated by Emily Carroll. Baba Yaga isn't my favorite fairy tale, but I've recently read two versions that I really enjoyed. One of them is this graphic novel of the traditional Slavic folk tale. Distraught at the fact that her father is remarrying, Masha decides to try out for an assistant gig with the local witch. She gets into the house on chicken legs but Baba Yaga puts here through a series of magical tests. Masha draws on her intelligence to outsmart the devious witch.

Trickster: Native American Tales, various authors/illustrators. My kids and I love trickster tales, which is why I checked this one out. I didn't get a chance to read all of the stories, but my 11 year old did. His verdict was that they were good. I asked if he thought they were appropriate for his age and he said, "Yes, except maybe not two of them." So I'm recommending this for the upper age limit of this list. 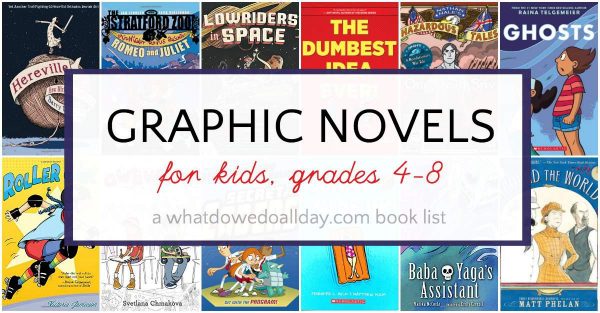 Subscribe to our newsletter and as a thank you, receive 10 waiting games kids can play anytime anywhere.
Your email will *never* be shared or sold to a 3rd party. Click here to view our privacy policy.
« Creative Family Memories in a Box
Game of the Month: Mille Bornes (Vroom! Vroom!) »
2057 shares