I have a confession. I love modern fairy tale retellings and I have no shame in admitting I'd rather read one of these middle grade fairy tale chapter books than a "grown-up" book any day. So why have I not made a book list before now? Well, the mysteries of the universe are vast, but at least I'm making it now. 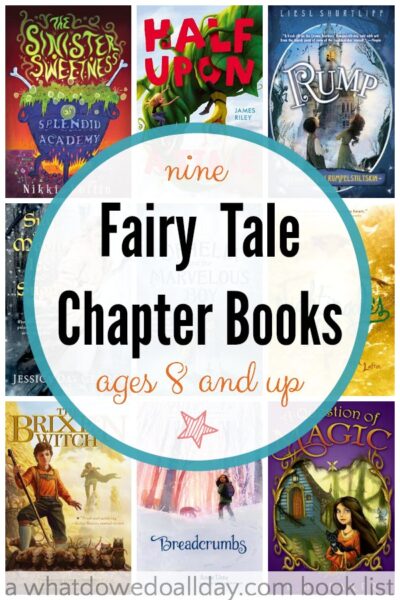 I've limited this fairy tale book list to non-princess stories. (I'll do another list of princess fairy tale chapter books, not to worry!) That's not to say there won't be a prince and princess (or two) in these books but the fairy tales on which these chapter books are based are not the ones we typically think of as "princess tales."

These are all middle grade books, suitable for ages 8 and up. Most of them are great fun, although a few are more serious and all will appeal to both boys and girls. There is only one fairy tale duplicated below, so the variety should keep kids interested for a while! (Note: covers and titles are affiliate links.)

Rump: The True Story of Rumpelstiltskin. I just finished reading this marvelous book which flips "Rumplestiltskin" on its head. Instead of being the villain, Rump, as he is known has always felt like half a person because he doesn't even know his full name! He and his grandma scrape by on the meager rations provided by the miller in exchange for the gold he finds in the mine. One day Rump discovers that he can spin straw into gold, but it turns out not to be the blessing that he thought it might be. He goes on a journey to find out who he is and how he can get control over his magic. I thought Rump was a wonderfully drawn character. He had many, many flaws and quite a bit of self-doubt but as a reader I found him relatable. The author does a great job of making a character whom we normal loathe into a sympathetic creature.

The Brixen Witch. Before I picked up this book I would not have thought "The Pied Piper of Hamlin" would be good material for a fairy tale retelling. I suppose that is because as a kid I found the story of children being taken away by a piper quite disturbing! I had a Kate Greenway illustrated copy of the tale and even her pastoral drawings couldn't reconcile me to the tale! Anyhoo.... enough of my childhood fears. Rudi finds a coin on the mountain but it turns out to belong to the witch. He tries to return it so that the witch will not bring down a curse on the village, but he looses it in the snow. Then the RATS show up, followed by a strange man who promises to get rid of them for a price -- Rudi's gold coin. There's some bits about RAT catching. There was a surprising about of both humor and depth in this tale (you'd need it to balance out the RATS - did I mention their are RATS?) and if you have a son who has succumbed to the "fairy tales are for girls" disease, this will be a good book to start his healing process.

Sun and Moon, Ice and Snow is based on one of my favorite fairy tales, "East of the Sun, West of the Moon", a Norwegian fairy tale that is reminiscent of Beauty and the Beast. A young girl journeys to the the north with a talking Polar Bear in order to save her family. The Bear hopes that she will be the one to break his curse, but when she accidentally makes things worse she must travel to the land of the trolls to save him. There are several other retellings of this fairy tale, but they are better suited for a YA audience. This retelling (also on my list of Winter Chapter Books!) is fine for ages 8 and up.

Half Upon a Time is the first book in a clever trilogy staring Jack, the son of "Jack of the Beanstalk" fame. Jack, firmly rooted in fairy tale world is trying to restore his family's good name when suddenly May, a "punk princess" with a cell phone falls from the sky. It turns out May's grandmother is Snow White and the two pair up to rescue the kidnapped grandma. Riley brings in material from several familiar fairy tales to create a story that is more of a fractured fairy tale than a retelling per se. But it is tons of fun, with humor, clever plot twists and the promise of two sequels to get kids reading more.

Breadcrumbs is a beautiful retelling of  "The Snow Queen". There are a lot of literary references in the book and it is exquisitely written. Hazel and Jack are friends, but one day when Jack gets a piece of glass in his eye he is whisked away by a strange, evil woman to a land of snow. Hazel sets out on a journey to find her friend and return home.

A Question of Magic is also on my list of books for kids who aren't quite ready for the entire Harry Potter series. This novel is a retelling of the Baba Yaga legend. Serafina finds out that her great-aunt is Baba Yaga and that she has been summoned to step into her aunt’s shoes! She reluctantly takes on her new role, in which she must truthfully answer one question from a stranger and live in a house that stands on chicken legs. There’s a bit of humor from the talking skulls in her new home and also some very light romance in the form of Alek who wants to rescue her from being Baba Yaga.

I found Nightingale's Nest to be a rather sad book. In fact, I'm not quite sure I even liked this retelling of Hans Christian Andersson's "The Emperor and the Nightingale," although the critics loved it. (I find most of Andersson's fairy tales a bit depressing, actually.) However, I wonder if my adult sensibility gets in the way. I don't know that kids would feel the same way. I probably would have liked it when I was a kid. 12 year old John is helping his father out cutting trees on the property of the local top businessman, Mr. King, when he meets the frail and mysterious Gayle. Gayle's singing voice is magical and Mr. King convinces John to betray his friendship with the girl in return for helping John's impoverished family. John feels sickened by his betrayal and seeks a way to redeem himself.

The Sinister Sweetness of Splendid Academy is a rather creepy and humorous take on the Hansel and Gretel story. When Lorelei and her brother start attending the new school, they find a permissive principal, a ready supply of dessert and the only rule seems to be that everyone must keep eating. Of course we can see where this is headed as the reader, but who will believe Lorelei's suspicions? A great book for kids who like a little spine tingling read.

Ophelia and the Marvelous Boy is another retelling of "The Snow Queen", although I enjoyed Breadcrumbs much more, primarily because I didn't find Ophelia as interesting as Hazel. The story is quite different from the aforementioned book, however. I listened to the audiobook while my 6 year old kept interrupting with lots of questions about Miss Kaminski, who was clearly the evil queen. Most of the action takes place in a museum, where Ophelia's father works and the marvelous boy has been locked away by the queen. Ophelia must find a way to rescue him before the Snow Queen unleashes her wrath upon the world. She faces trials in the museum rooms and corridors and must overcome bizarre obstacles like a Spanish conquistador, the misery bird and even child ghosts. Ophelia begins the book with a healthy dose of skepticism towards magic, but learns to overcome her mistrust of things she cannot understand.

Subscribe to our newsletter and as a thank you, receive 10 waiting games kids can play anytime anywhere.
Your email will *never* be shared or sold to a 3rd party. Click here to view our privacy policy.
« How to Make a Paper Indoor Boomerang - STEAM Project for Kids!
The Dos and Don'ts of Story Time (Tips from a Volunteer) »
4515 shares