×
You are here: Home / Books / Your Kids Will Relate to these Early Chapter Books about School
1213 shares

This was a complicated book list for me to make, not because there is a dearth of early chapter books about school for kids, but because there is a plethora. I could make a never-ending list because nearly every chapter book series either centers around school situations or has at least one installment that does. So I decided to narrow it down to cover a variety of school situation and diverse characters. 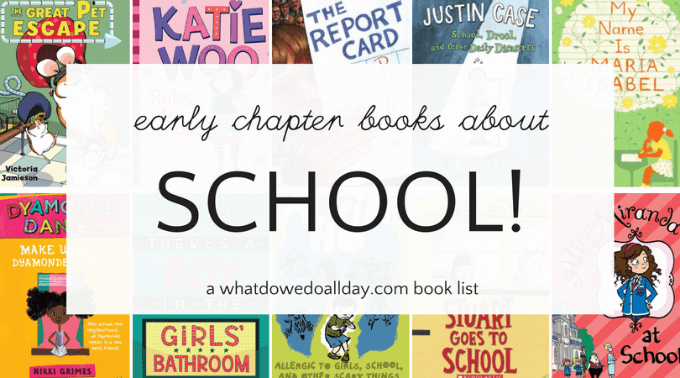 This list includes school chapter books about everything from field trips, new kids, first day-jitters, grades, alternative learning styles, dealing with (or being) a bully and more.

The reading level of these books is approximately 6-10 years old, but of course every child is different. Most are considered "early chapter books", but a couple are closer to the middle grade level (I've indicated which ones). All of them have appropriate content for ages 5 and up so very early readers can enjoy them, too. You can read my parent tips for choosing chapter books here. (Note: book titles and covers are affiliate links)

The New Kid: The Carver Chronicles by Karen English (series). This is the first and just-published book in a brand-new series about third-grader Gavin, who is starting a new school. When he and his friends get into trouble his punishment is to take care of his aunt's annoying little Pomeranian. The bow-bedecked dog is seriously interfering with his attempt to prove himself "cool"! I think a lot of kids will relate to Gavin. I liked this realistic book and look forward to more in the series.

West Meadow Detectives: The Case of the Snack Snatcher by Liam O'Donnell (series). Myron is a special needs third grader on the spectrum. He loves to solve mysteries at school with the help with his friend, Hajrah another student in the resource room. This series is great for its positive representations of non-neurotypical and diverse students.

Lola Levine is Not Mean by Monica Brown, illustrated by Angela Dominguez. I really enjoy the Lola Levine series, and this is the first book about a likable, intelligent half-Jewish, half-Peruvian protagonist. Lola loves to play soccer but is distressed when she accidentally hurts a classmate and the other kids start to call her "Mean Lola Levine." Lola figures out a plan to change everyone's mind and show them that she is really a nice person and good friend.

The Great Pet Escape by Victoria Jamieson. Jamieson is the author of the popular Roller Girl. This is the first book in a graphic novel series, Pets on the Loose. A class pet, GW the hamster, has collected enough classroom debris to create a machine to allow him to escape his cage. He sets out to free the other class pets where chaos and hijinks ensue. My 3rd grader loved this one!

Kelsey Green, Reading Queen (Franklin School Friends series) by Claudia Mills. In this first installment of chapter books about, Kelsey and her classmates are participating in a school reading contest. Kelsey is distressed to find out that she is not leading the pack with the most books read so she starts to read shorter books in order to catch up even though she is an advanced reader. Kelsey, however, ends up finding more pleasure in helping one of her friends who is a struggling reader.

8 Class Pets + 1 Squirrel ÷ 1 Dog = Chaos by Vivian Velde. This was one of the most hilarious read alouds the boys and I have ever enjoyed. Each chapter is told from a different animal's point of view as a dog chases a squirrel through various classrooms in and elementary school, each with its own class pet. Riotous, great giggly fun.

The Life of Ty: Penguin Problems. This series by Lauren Myracle follows Ty as he navigates having a new baby sister, his best friend in the hospital, and a class trip to the aquarium. Grown-ups may find the resolution of the "penguin problem" to be a bit simplistic, but neither of my kids minded when I read this early chapter book aloud to them. They were much more focused on the humorous complications taking a penguin home could cause. I believe this is set to become a series.

Clementine and the Spring Trip by Sara Pennypacker (series). Clementine is one of my most recommended early chapter book series when my mom-friends ask me for suggestions. Although school events feature in all of the book, this one in particular stands out. Clementine is preparing for a school trip to Plimoth Plantation and has to deal with "silent eating" (no crunching, smacking, snicking, slurping or gulping), a smelly school bus, the new girl who speaks a made-up language (but who is also named after a food) and the shock of seeing her principal in non-principal shoes.

Justin Case: School, Drool, and Other Daily Disasters by Rachel Vail (series). Introverted and sensitive Justin Case is very, very, very nervous about starting third grade. I love how authentic Justin is; he analyzes everything from soccer, to his friends and "enemies", to advanced math problems. Vail wrote Justin's story in diary format, with some short sentences mirroring Justin's thoughts but it's not the diary of Wimpy Kid-fare.

Alvin Ho: Allergic to Girls, School, and Other Scary Things by Leonore Look (series). I love Alvin Ho and cannot resist encouraging you (yet again) to pick up one of these books for your child. Alvin suffers from anxiety over many things and this leads him to become mute at school. Nevertheless, his family life, antics and tales of how he navigates "scary things" never fail to charm.

Andrew Clements is a go-to author for school-themed books. It's nearly impossible to choose just one. His best known book is Frindle, about a boy who decides to invent a new word for "pen," but another favorite of mine is No Talking in which the boys and girls in 5th grade have a contest to see who can say the fewest words. My son also read The Report Card, which he assured me was very amusing and is about a girl who, although she can easily earn As, decides to get Ds and Cs on her report card in order to prove a point. Clements' books are best for the upper reading levels of this list.

Stuart Goes To School by Sara Pennypacker. Stuart has many worries about starting school: Will he be able to find the bathroom? Will he be the shortest kid? Will he make friends? Why did his mother set out green plaid pants for him to wear? You know, the usual. Fortunately, he has a cape. A magical cape made from 100 ties. And a very active imagination.

There's A Boy in the Girl's Bathroom. Louis Sachar has written a great book about the power of kids who want to change from "bad" to "good."  Bradley is the school bully but what he really wants is to be recognized for something worthwhile. When the new school counselor arrives he gets his chance.  Don't be put off by the title, there is humor — yes — but this is a book with layers of thought-provoking material.  Sachar's books are denser than many on this list - best for kids on the higher end of this list's reading level.

My Name Is María Isabel by Alma Flor Ada. María Isabel Salazar López loves her name but when she starts a new school, her teacher decides to call her Mary in order to distinguish her from the other Marías. This is a short, sensitive early chapter book about a child's fears about fitting in and respecting cultural differences.

Kevin Keeps Up by Ann Whitehead Nagda. Kevin's beloved teacher, who understands how to help him focus and encourages his creativity is off to Africa for several weeks. Kevin is upset that the substitute seems to only see the negative side of his struggles with ADHD as he works on a class project about animals. Kevin's difficulty keeping precision focus in the classroom will be understood by many children (ADHD or not) and I loved how the author shined a positive light on Kevin's inventive contributions to the class project.

Katie Woo Rules the School by Fran Manushkin. The Katie Woo series is a good choice for the youngest chapter book readers who like to read about kids facing school dilemmas. Four stories include Katie dealing with losing the class pet, a school bully, stealing and the school play.

Alice-Miranda at School by Jacqueline Harvey (series). Alice-Miranda Highton-Smith-Kennigton-Jones is one of those heroines who have boundless energy, optimism and a knack for solving everybody's problems. These qualities serve her well at Winchesterfield-Downsfordvale Academy for Proper Young Ladies, a boarding school with a headmistress named Miss Grimm and a Queen Bee named Alethea.

Make Way for Dyamonde Daniel by Nikki Grimes. Dyamonde is one of the most optimistic characters in early chapter books! She has a single mom, lives in a small apartment (I can relate - on both counts) and is starting a new school. Yet through it all she is a go-getter, a can-do gal. This is the first book in the series and as the new kid in school, Dyamonde sets out to make friends with the other newbie, despite his grouchy attitude. Don't stop with this one, read the rest of the series, too.

With large font, short chapters and lots of pictures, the Appleville Elementary series by Nancy E. Krulik is a great choice for very young chapter book readers, especially kindergarteners. It was one of the first series my son read when he was starting chapter books. Four books, covering one full school year, star a diverse group of kids. 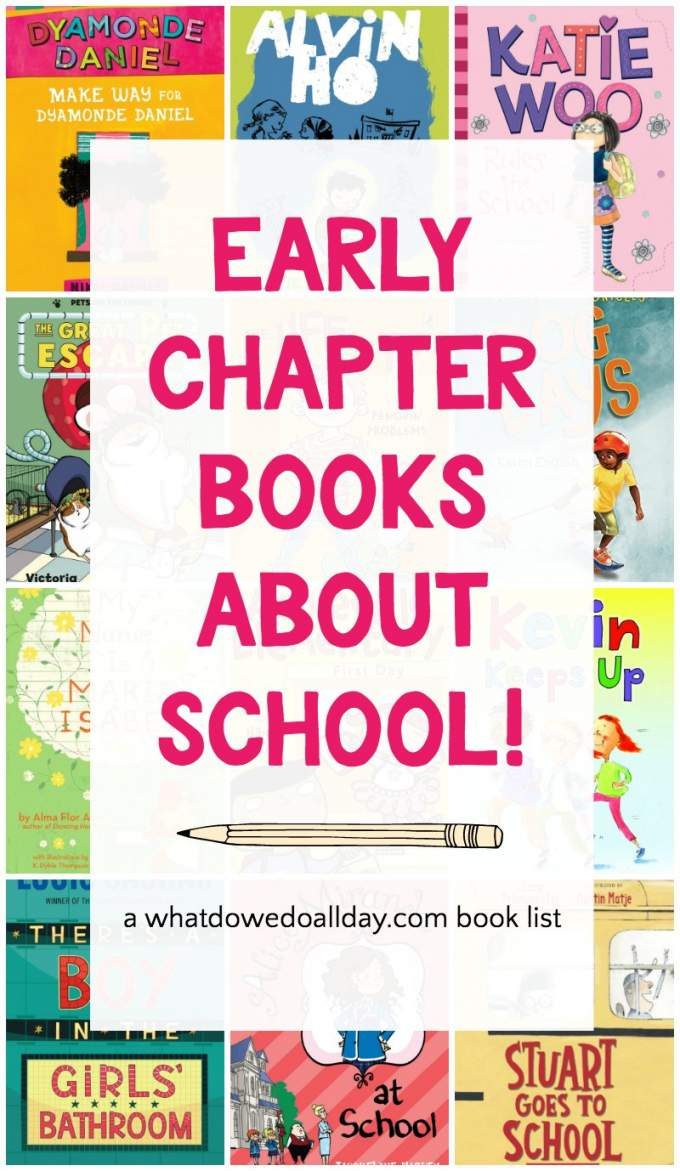 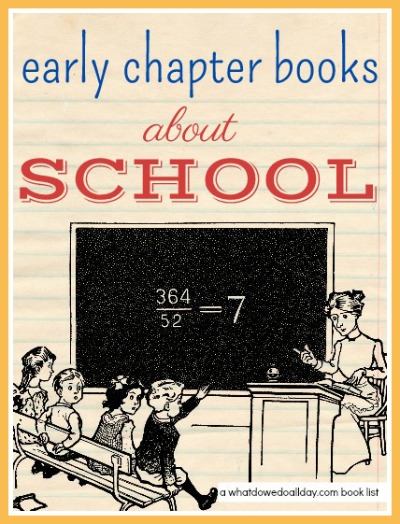 Subscribe to our newsletter and as a thank you, receive 10 waiting games kids can play anytime anywhere.
Your email will *never* be shared or sold to a 3rd party. Click here to view our privacy policy.
« Game of the Month: Quiddler
How to Read to Differently Aged Children for Great Family Read Aloud Time! »
1213 shares