×
You are here: Home / Books / Magical Books for Kids who Like The Chronicles of Narnia
9424 shares

If your kids have read and enjoyed C.S. Lewis's classic series, I hope they will enjoy the titles on this list of books for kids who like The Chronicles of Narnia. As with my other "books for kids who like..." lists, I haven't included only books that resemble Narnia in plot details and themes. I'm interested in recommending books that help your children expand their reading horizons!

I did, however, search out titles that have travel to magical worlds, or fantastical animals, or books which are lesser known classics. A few of these "books like Narnia" will be well-known to you, but I think you and your kids will find a few new-to-you books to read after you finish The Lion, the Witch and the Wardrobe and it's companion books.  These books are all appropriate for kids who can read the Narnia series independently, and a few are good for read alouds to younger kids.

The House of Arden, by E. Nesbit, published 1908. Edred and Elfrida Arden are the heirs to Arden Castle, and just before he turns 10, Edred becomes Lord Arden, but he won't inherit the missing fortune unless he finds it before his birthday. The siblings set off on a time travelling adventure to find the treasure. Edred and Elfreda squabble like normal siblings and a grouchy magical creature, Mouldiwarp adds a quirky touch to this fun tale.

Bed-Knob and Broomstick. Full confession: I adored this movie when I was a kid and it wasn't until many years after seeing the film that I read the book. You are probably familiar with the premise: three siblings in possession of a magical bed-knob travel through time and space. The Price children are visiting their aunt and discover that the neighbor is a witch. The witch buys their silence with the magic token and the children set off in hopes of finding their mother. The book is quite different from the movie and quite delightful and full of old-fashioned, gentle fun. It is also a fun read aloud.

Carbonel: The King of Cats. Young Rosemary buys a second hand broom and a cat at the market. At first it seems like it was a foolish purchase, but things are not always as they seem! The new cat turns out to be royalty!  Rosemary and her friend, John, get caught up in an adventure and mystery in their quest to break the witch's spell. I discovered this book as an adult, thanks to the New York Review Children's Collection, which republishes lesser known classic gems. I would have adored it as a kid.

Mio, My Son. I was quite ecstatic to discover that Astrid Lindgren had a few books I'd never read. This one is lovely book about 9 year old adoptee Karl Anders Nilsson, who dreams that his real father is a king. Then one day he finds himself in Farawayland, where his father is actually the king! But the evil Sir Kato has kidnapped the children, and Mio and his friend Pompoo must stop him.

Storybound. In the land of Story, kids go to school in order to learn their rôle, such as hero, or villain, or sidekick. But their way of life is disturbed when Una, a seemingly ordinary girl from the ordinary world drops -- or rather, she is written in --  into Story. Una, her new friends, Peter and Snow, must unravel the plot twists of the mystery of why she is there.

It's been a long, long, long time since I read The Blue Sword, and its prequel, The Hero and the Crown, so I'm not sure I can recount the plot points accurately but I wanted to include it here anyway. This Newbery honor book (and Newbery award winner) is an elaborate fantasy with a strong female protagonist. I love author Robin McKinley's books and any kid who is a fan of fantasy or science fiction will gobble up McKinley's books.

Story Thieves. When Owen discovers his new friend Bethany is half-fictional and has the ability to jump into books, he convinces her to take him into his favorite book. Even though Bethany is adamant that Owen be very careful not to change any part of the story, he secretly decides to try and affect the outcome of the plot by thwarting the villian, thereby winning himself glory with his peers. As you can imagine, such a disruption sets in motion a serious of chaotic and potentially disastrous events!

A Wrinkle in Time (Time Quintet). This classic series hardly needs an introduction. If your kids have read Percy Jackson and the other Riordan series, and they haven't yet read L'Engle's books, give them a copy of this timeless book.

The Princess and the Goblin by Scottish fairy tale-ist (is that a thing?), George MacDonald, is a gem from 1872. C.S. Lewis sited MacDonald as an influence on his work. Eight year old Princess Irene is lonely. One day when she is out wandering she meets an mysterious woman who turns out to be her great-great grandmother. In the nearby mountains, a boy, Curdie, overhears plans by the goblins to flood the mine. The stories of Curdie, Irene and her great-great grandmother converge as Curdie travels to the goblin's domain and Irene finds him with the help of a magical thread. The story contains themes of courage and faith and thankfully, despite its age, the heroine is a strong one.

I read The Last of the Really Great Whangdoodles out loud to the kids and both boys (then ages 9 and 5) absolutely loved it. Three siblings travel to a magical land with the help of their "scrappy caps" and a wise Professor. Along the way they meet fantastical creatures, some of whom do not want them to arrive at their destination. As in HP, there is a villain who turns out to be not quite villainous after all.

Half Magic. This classic series should be read by everyone. A group of siblings discover a coin that grants only half a wish. The children must work together to make complete wishes and then navigate the unexpected outcomes. Delightful.

The Castle in the Attic.The idea of a miniature castle coming to life was irresistible to me as a kid. William’s housekeeper, Mrs. Phillips gives him a model castle set but things go awry when Mrs. Phillips is shrunk down to the size of the castle and William must shrink himself down to rescue her. Dragons, wizards, magic forests and knights make this a wonderful fantasy quest kids will love

Howl's Moving Castle, or any book by Diana Wynne Jones. Jones wrote loads of fantasy novels and you might recognize the title of this one because it was made into a successful animated movie. However, it’s such a captivating book, don’t limit yourself to the film version. Young Sophie is transformed into an old woman by The Witch of Waste and the only way to break the spell is to seek out the Wizard Howl in his bizarre moving castle. The complexity of the story makes it better for older kids, ages 10+.

The Spiderwick Chronicles, the Complete Series. This well-loved series has everything you need for a great fantastical story: mystery, magical creatures, and lots of fun. I've never seen the movie, but my son has gobbled up the books.

The Golden Compass (His Dark Materials Trilogy). Interestingly, Pullman dislikes Lewis's works, but there's no reason why we can't appreciate both authors! Two kids, Lyra and Will, cross parallel universes in a world where their souls (for lack of a better word) exist outside of their bodies as animal companions. The plot is complex and is heavily involved with philosophy and theology. It is a fantastic trilogy but I recommend it for ages 12 and up.

Half Upon a Time is the first book in a clever trilogy staring Jack, the son of "Jack of the Beanstalk" fame. Jack, firmly rooted in fairy tale world is trying to restore his family's good name when suddenly May, a "punk princess" with a cell phone falls from the sky. It turns out May's grandmother is Snow White and the two pair up to rescue the kidnapped grandma. Riley brings in material from several familiar fairy tales to create a story that is more of a fractured fairy tale than a retelling per se. But all three books are tons of fun, with humor, and clever plot twists.

More book lists that include books for kids who like The Chronicles of Narnia:

Don't fret! You won't miss any of our weekly booklists if you sign up for our newsletter. 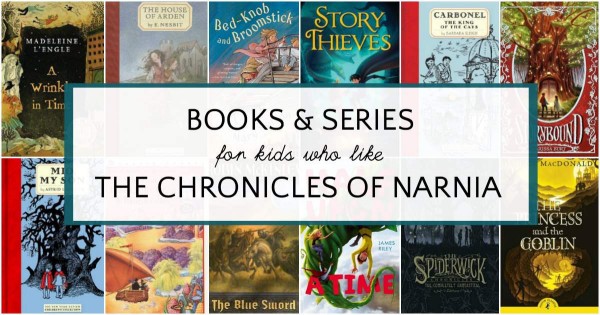