It’s hard to believe I’m writing about books for 8 year olds! Time files. My oldest son is in that nebulous place between “early chapter books” and “middle grade fiction.” Middle grade books are generally aimed at kids ages 8 to 13 but that doesn’t mean every book is age appropriate or able to capture my son’s unique sensibilities. Just like any other reading level category, there is a wide range of material to sift through. 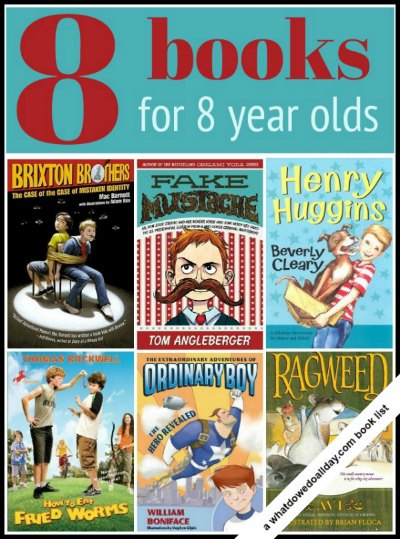 Like many 8 year old boys (and girls), when my son chooses his own reading material his stack of books is almost entirely non-fiction. He still likes fiction, but I need to provide it for him. Whereas I used to spend lots of time in the library searching for good early chapter books for him, I now find myself flipping through more advanced titles! The books he wants to read have a few common themes: humor, boy protagonists (working on getting some girls in there!) and adventure or mysteries to be solved.

I’ve noticed that many of Kiddo’s friends are using ereaders, so I’ve noted which books are available in that format. {Note: These are all books my 8 year old loves. As always, I’ve used affiliate links, should a book spark your interest.}

Brixton Brothers. (SERIES) This has become a rare series we actually pre-order when we know the next one is being released. There are very few books I buy before reading them at the library and for a series to make the cut it must 1) have great writing; 2) be a book I know will be read repeatedly; and 2) be one I know both boys will want to read.  The more I read the Brixton Brothers books the more I like them.  12 year old Steve (kids love to read books with older protagonists. It makes them feel so grownup!) dreams of being a detective and has studiously read and re-read The Baily Brothers Detective Handbook.  He knows everything about solving crimes, which comes in handy when he finds himself thrown into the middle of an exciting mystery. Every book has tons of adventure, twist and turns, loads of intelligent humor and a satisfying ending. Can you tell yet that I love them? These would be a great choice for kids who like Encyclopedia Brown. Also available as ebooks.

The Extraordinary Adventures of Ordinary Boy. (SERIES) Ordinary Boy (that’s his real name) is the only inhabitant of Superopolis without a superpower. As you might imagine, his ordinariness is the very thing that helps him excel.  Superopolis is suffering from too much consumerism and a developing mystery involving the rivalry between Professor Brain-Drain and Amazing Indestructo is taking its toll!  There is a lot of silly humor, coated with a heavy dose of irony and puns, but I think the series rises above the usual slapstick fare. I appreciate the long length (each book averages about 300 pages) since my son reads so fast he breezes through at least one book a day.  Superhero fans will find more selections on my list of superhero picture and chapter books. Also available as ebooks.

Fake Mustache: Or, How Jodie O’Rodeo and Her Wonder Horse (and Some Nerdy Kid) Saved the U.S. Presidential Election from a Mad Genius Criminal Mastermind. I have a bit of a soft spot for crazy long names so how could I resist this one? 7th grader Lenny Flem Jr.’s friend, Casper, comes into an unexpected windfall and purchases a suit and fake mustache. Shortly afterwards a string of robberies takes place and Casper makes a grab for world domination. Sound absurd enough for you? One of the surprising twists of this books is that half-way through, the narration switches from the Lenny (male) to Jodie (female) and somehow Angleberger makes it all work brilliantly. (His recent picture book, Crankee Doodle was on our favorite books of 2013 list.) You won’t find another book with a plot quite like this. Kiddo actually read several passages out loud to me to demonstrate how good he thought the book was. Also available as an ebook.

Henry Huggins. (SERIES) Classics are always worth revisiting! Kiddo read Cleary’s series of books about Henry and his friends when he was 5 or 6 (we also enjoyed them together as read alouds) and yet here he is at age 8 reading them again and telling me how much he loves them. Henry often plays second fiddle to the wildly popular Ramona; I imagine because his scrapes are not quite as precarious as his more famous neighbor. If you have a Ramona fan who hasn’t yet been introduced to this series, he or she will love reading Henry’s perspective on her antics. Alternatively, if your son doesn’t want to read a “book about a girl” he’ll most definitely want to read the Ramona books after getting a glimpse of her through Henry’s eyes. Also available as ebooks.

How to Eat Fried Worms. Raise your hand if you read this 1973 book when you were a kid! If you haven’t yet read it, do not judge a book by its title. This is a smart, funny, suspenseful book which paints a realistic portrait of boys in a state of “war” against each other. I bought this book for Kiddo as one of his first-day-of-third-grade-books. Billy accepts a challenge to eat 15 worms in 15 days. The prize is a whopping $50. While Billy thinks of new ways to make the worms palatable, his competitors come up with increasingly complex ways to outwit him. Also available as an ebook.

Tales from Dimwood Forest. (SERIES) Ragweed is the perfect example of a book Kiddo would not have picked up by himself. He started reading the rest of the series after we read it aloud together (my 4 year old loved it too).  Ragweed is a mouse who craves adventure. He leaves his family, hops a train and lands in a town where he makes friends with other mice, learns a lot about life and helps foil the local cats.  Avi’s ability to convey complex human emotions and discuss subject matter like fear, death, ambition, love and friendship in a way that kids can understand and relate to is rather remarkable, especially given that the characters are all animals. Here’s a warning, though: Ragweed dies in the first chapter of the next book, Poppy

. However, Avi’s brilliant handling of Poppy’s subsequent journey as a result of Ragweed’s death prevented my kids from finding the event traumatic. This series has quickly become one of my top recommendations for read alouds.

Tales of a Fourth Grade Nothing. (SERIES) You know an author is a superstar when her last name is larger than any other feature on the cover, including all 6 words of the title put together. Kiddo loved this book, the first in Blume’s Fudge series about Peter Hatcher and his 2 year old kid brother, “Fudge.” Older siblings everywhere will relate to Peter’s exasperation at his messy, loud, trouble making brother, especially since Peter seems to get the lion’s share of blame. Like the Henry Huggins/Ramona situation (see above) boys who resist so-called “girl books” will be tempted to read Otherwise Known as Sheila the Great

Timmy Failure: Mistakes Were Made. (SERIES) Timmy Failure’s format is easier to read than many other middle grade books (e.g. more accessible for kids who may still resist small type) and includes plentiful illustrations (Pastis is a cartoonist). Timmy aspires to be a great detective, but that’s a bit tricky when his partner is an imaginary polar bear. Timmy is also a bit clueless and naively confident of his skills. This all sounds depressing as I write it, but the book is actually a great mix of offbeat silliness and more serious issues. Parents of younger kids may be tempted to pick up these books because of the large type and illustrations but the sly humor is best appreciated by kids ages 8 and up. Also available as ebooks. 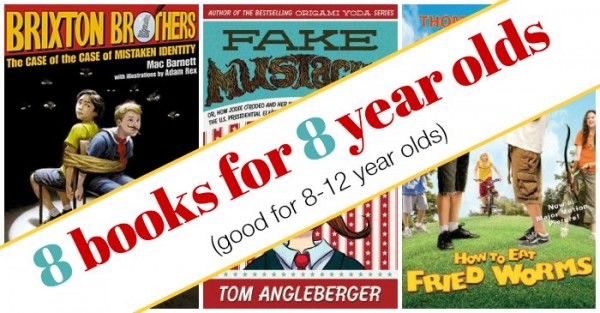 Subscribe to our newsletter and as a thank you, receive 10 waiting games kids can play anytime anywhere.
Your email will *never* be shared or sold to a 3rd party. Click here to view our privacy policy.
12038 shares
« Game of the Month: Blokus
Indoor Activity Ideas: Pretend Play Prompts »