×
You are here: Home / Books / 12 Picture Books about Theater for Kids

This list of children's books about theater has been rattling around in my brain for a while. Do you take your kids to the theater? Perhaps you have a budding thespian, playwright or stage hand? Maybe you think to yourself (not that you'd admit it, of course), "my child is such a drama queen." 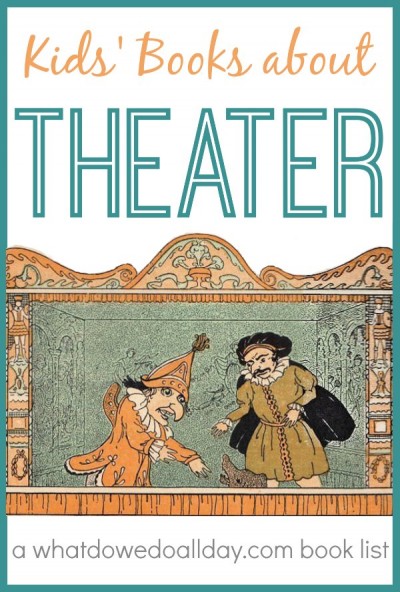 The theater is a big part of our lives. I take my kids to the theater on a regular basis, and I grew up on and off the stage, and even earned a graduate degree in dramatic history and literature. Neither of my kids show much of an inclination for treading the boards, so to speak, but I do want them to grow up to be good, life-long audience members, appreciate the work and talent that goes into a production and consider live performance as a vital and necessary part of society. These picture books address various aspects of production, from starring in a show, to watching one, to working backstage.

Children's books about the theater

When you aren't taking your kids to the theater, these picture books will reinforce the magic of the stage. I'm also really pleased I was able to find a number of books with diverse characters.  (Note: all book covers and titles are affiliate links.)

. Of all the books on this list, Amandina is my favorite. Amandina is very talented, but very shy. She decides to put on a show. She cleans up an old theater, constructs the sets, sews the costumes, rehearses the acrobatics and puts up the posters. When she opens the curtains, however, the house (aka the audience) is empty. Disheartened, but determined, she puts on the performance of a lifetime, not knowing that while she sings and dances the audience is growing... Ruzzier's illustrations evoke the commedia dell'arte of his native Italy and his text perfectly captures the true spirit and heart of what it means to be a performer. A must read, and get it while you can, because it's gone out of print.

. I was once on stage with a cat. Wisely, the cat stayed either in my arms or in its carrier. I can imagine the chaos a cat might create when let loose during a live event! An actress brings her cat, Simon, to the theater with her. Simon patiently watches the diva get ready but when she gets on stage the cat decides to poke around and when the loud noises frighten him he gets into all sorts of trouble as the stage hands try and retrieve him. This is a fun read and I love the illustrations of the inner workings of the stage.

. In 1915, Rifka's parents are actors in a Yiddish theater on 2nd Avenue in New York City. Rifka describes the experience of traveling with them to the theater, hanging out with the actors as they prepare and watching the action from backstage. Being among the hustle and bustle of a group of people getting ready for a performance is just as magical as being on stage. From the surprise of  fake props, to the transformation of actor into character, to the careful traipsing across stage wires, Perlov gets that magic just right. Even if your child has never had the privilege of "treading the boards" or "watching from the wings" he or she will want to jump right in after reading about Rifka. An end note gives historical background on the importance of Yiddish theater in America.

. I once had the great pleasure of seeing a performance given by the National Theater of the Deaf, and many theaters also provide interpreters during specific performances so non-hearing people can enjoy the magic of live theater. Moses is a student a a school for deaf children. After seeing a performance by The Little Theater of the Deaf, the class decides to put on a show of their own. Included in the book are wonderful descriptions of the performance action and how the actors use their bodies to convey meaning. In addition, the book is also written in sign language, and includes diagrams of signs, which teachers and parents can use to practice with their children.

book is the original picture book, but you can also find Grace chapter books on my list of 35 diverse early chapter books. An interesting fact is that Laura Bush named it one of her 5 favorite books of all time. Grace's favorite thing to do is act out her favorite stories (and aren't all children natural actors during pretend play?). She wants to play the role of Peter Pan in the school production, but her friends tell her she can't because Peter is a boy, and not black. Her grandmother, however, shows Grace that she can be anything she wants, if she puts her mind to it. It so happens that Grace makes a delightful Peter Pan.

. Kamishibai is a Japanese picture storytelling tradition. The storyteller transports a small wooden stage via bicycle from town to town performing his stories and selling candy. In Allen Say's book, an elderly storyteller takes his old stage out for a spin. He tells his stories (if you read some of the books on my list of Japanese folk tales you will recognize some of the titles) and in addition tells his own story of how in years past the television took over the role of the Kamishibai. To his delight, the adults in his audience identify themselves as the children of long ago. I love this book because I am a huge evangelist for live theater, in whatever form it comes in, whether it is a large stage or a traveling box. Recorded video on screens will never be an adequate substitute. Also available as an ebook.

reminded me of the adage, "there are no small parts, only small actors." Tommy can't wait to play Peter Rabbit in the school play. When he gets the part of Mopsy, instead he decides to make the most of it. Perhaps too much of it. After he hams it up on stage, he learns the valuable acting lesson, "don't steal the show". It doesn't stop him, however, from becoming "stagestruck." This is a cute book for kids who can't resist being the center of attention. Also available as an ebook.

Pet of the Met

. Why is this book out of print. That makes no sense. (Shakes head.) Maestro Petrini, a mouse, works as a page turner at the Metropolitan Opera House. During a production of The Magic Flute (...my favorite opera, by the way. I wrote a stellar paper on it in grad school, if I do say so myself.) he cannot help but throw himself wholeheartedly into the production.

. Louise faces the dilemma of every actor: how to cope with jealousy when your friend gets the lead in Cinderella and you get... the part of the mouse. Louise doesn't handle it very well at first, but when her friend gets a case of stage fright she steps up to the plate and takes on the most important role ever, that of a supporting actor. Also available as an ebook.

The Happiest Tree: A Yoga Story

. I was hesitant to include this story at first but then I thought about how movement is such a crucial part of acting and being comfortable with your body is something every actor works on. Meena is working on the school play. She works on the sets but is also going to be playing a tree. She is nervous that she is too clumsy. One day she walks by a yoga studio and her aunt encourages her to sign up. Learning yoga techniques is the key to overcoming her nervousness and she becomes "the happiest tree in the whole forest."

The Boy, The Bear, The Baron, The Bard

is a wordless, energetic adventure! A boy chases a runaway soccer ball backstage only to find himself transported to the world of Shakespeare and onstage at The Globe! Shakespeare himself begins to chase the boy off the stage and they embark on a chaotic journey around Elizabethan London, picking up a bear, an imprisoned baron along the way, and leaping onto a barge inhabited by Elizabeth, herself. While the story itself is not focused on performance or acting, the idea of the theater as a place where transformation takes place will stick with you.

. This is one of the few books that takes a look at the process of writing a play. Katie and Kyle each decide to write a play. Katie's will be about a star, Kyle's about a moon. The action of the story is set out in "Acts" and as the friends share their plays with each other, the text is set out like a script.  As the pair continue writing and producing their scripts, they decide, in the end to collaborate on production, deciding it is more fun to work together than separately. I found this a difficult book to read aloud. The action shifts between the friends and the plays, so you will probably have to explain the action to your children. Check it out from your library, though, because I enjoyed the illustrations and if your child is interested in writing and performing stories, I think they will enjoy it.

Novels about theater for kids

Thanks to The Graphics Fairy for the Punch and Judy illustration.

Subscribe to our newsletter and as a thank you, receive 10 waiting games kids can play anytime anywhere.
Your email will *never* be shared or sold to a 3rd party. Click here to view our privacy policy.
« Explore Shapes with a Gorgeous Bookmaking Project
The REAL Summer Bucket List »
1247 shares